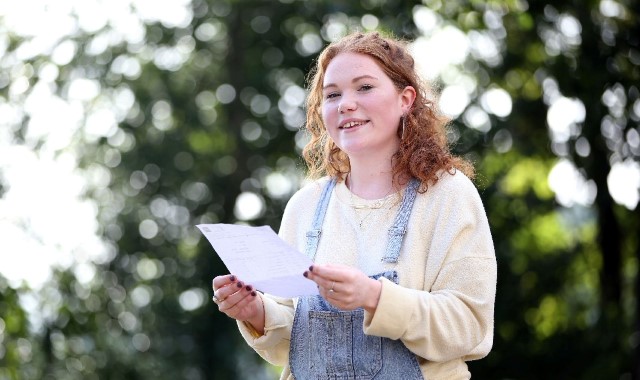 ANIMAL-LOVER Beth Hall is on her way to fulfilling her dream to be a vet after demonstrating the importance of bouncing back from disappointment.

Beth is one of the students celebrating A-level success at Carmel College in Darlington, which has achieved a “superb” 60 per cent A*-B grades – the key measure for colleges.

Beth, who lives in Trimdon Village, needed three A’s last year to study veterinary medicine but while she achieved an A* in history, she got B’s in biology and chemistry.

However, Beth has bounced back this year by getting an A* in biology and an A in chemistry and will now study at the Royal Veterinary College at the University of London.

“My message is that if it doesn’t work out first time, don’t panic – just make it work the second time,” she said.

Beth was inspired to pursue her dream by her love for her two cats, Stan and Ron.

Ron came in as a stray to the vet’s practice in Newcastle, where she was on work experience.  “I couldn’t resist him so he ended up back at home with Stan. I love animals and I love science so I wanted to combine the two,” she said.

Carmel College is also celebrating having some real high-fliers among its students. Matthew Hopkins will be studying physics at Oxford after achieving four A* grades in maths, further maths, physics and chemistry.

Mark Southern also achieved four A* grades – in maths, physics, biology and chemistry – and will study physics at Durham University.

And Toby Gay is off to Oxford to study Maths after achieving three A* grades in maths, further maths and physics, plus an A in Chemistry.

This year’s results at Carmel show a seven per cent increase in A*-B grades.

Principal Mike Shorten said: “We’re absolutely thrilled. We’ve hit the 60 per cent mark in A*-B grades once before so these superb results are among our best ever.

“What makes it even more special is that this was a really challenging year because of all of the changes to the A-level syllabus. It’s a huge credit to the students and staff that we’ve done so well.”