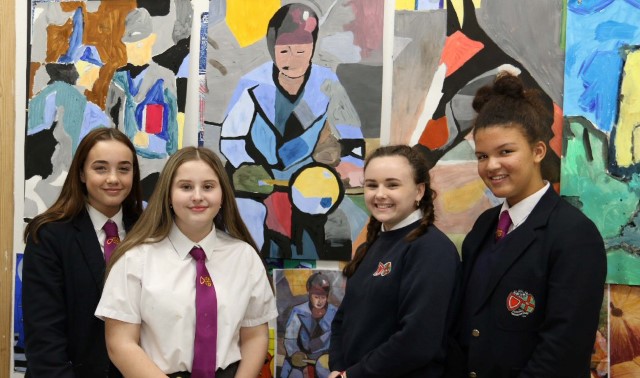 YOUNG artists have captured a snapshot of time recreating a celebrated mural which is currently the focus of community attention.

Damp is threatening the future of the Pittuck Mural painted onto the east wall of St Mary’s Parish Hall, in Newgate, shortly after its construction in 1957.

It was gifted to the town by artist Douglas Pittuck, who taught at Barnard Castle School, but is now in danger of being damaged by damp.

The mural reflects life in the town from the 1950s. It includes landmarks such as the Market Cross, Methodist chapel, St Mary's Church, the round tower of the castle and the ‘pepper pot’ tower of Barnard Castle School.

Glaxo’s factory, Bowes Museum are also depicted, along with a Raby Estates farm and houses.

Various figures from the era populate the mural, including women in headscarves, men in flat caps and Barnard Castle schoolboys in blazers. Soldiers from the former Deerbolt camp also figure.

Inspired by the plight of the mural, Year 9 students at Barnard Castle School staged a house competition in which they had to paint sections of the artwork, with the girls of Longfield taking the honours.

Head of art Kate Baptist said: “The mural is such a great resource for the town as it captures a snapshot in time, a piece of social history about life in Barnard Castle and the surrounding area. The English department have responded by asking year 9 to produce some creative writing based upon the mural, which will be collated into a booklet to sell. We are also looking at it as the inspiration for music and drama vignettes which will coincide with an exhibition in the town during the month of April.”