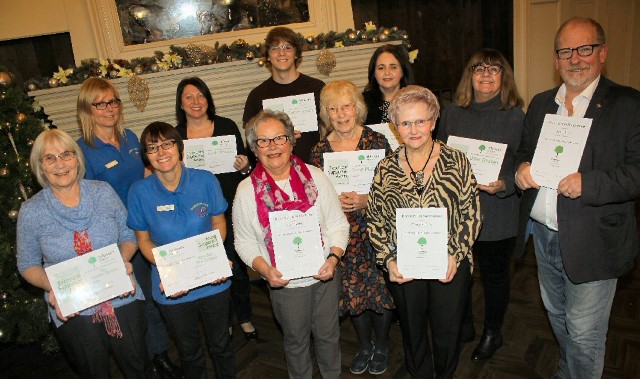 HOSPICE heroes enjoyed their moment in the spotlight as they were honoured for their years of service, commitment and support.

Fundraisers, volunteers, staff and supporters were presented with a host of awards at St Teresa’s Hospice’s annual general meeting, at The Blackwell Grange Hotel, Darlington.

St Teresa’s Hospice honorary chairman Dr Harry Byrne handed out framed certificates to young supporters, local school representatives, individuals and organisations that have helped to support and raise funds for the hospice over the past 12 months.

Addressing the audience, Dr Byrne said: “It is no surprise that this has been another financially challenging year for St Teresa’s Hospice

“With pressures on the public purse and ongoing competition from other charitable organisations, it is extremely hard to raise the £3.5m needed each year to keep the hospice running.

“But the commitment of our supporters and the people of Darlington and district remains strong and we continue to have a hospice that is the envy of all our peers – a truly outstanding organisation.”

Special tributes were made to friends and supporters of the hospice, recently passed away, including George Laing, former managing director of Darchem, who helped establish the One Wish Lottery helping to raise £8m for local hospices; former hospice treasurer Don Ogden, who worked as a voluntary Finance Director for many years and was instrumental in starting the hospice’s annual Christmas Cracker Concert; and trustee Mike Challands, who also served on the hospice lottery board and provided St Teresa’s with business advice and mentorship, help from his company MT Print and supported many hospice events.

Chief Executive of St Teresa’s Hospice Jane Bradshaw said: “We are very privileged to have a lot of people who support the Darlington and District Hospice Movement as trustees, of which George, Don and Mike were three, shining examples.”

Entertainment for the evening was provided by the St Teresa’s Hospice Staff and Supporters Choir, accompanied by guitarist Peter Bradshaw.

“Our AGM is one of those rare opportunities when we can get everyone together to say thank you,” added Mrs Bradshaw.

“Thank you to our trustees, our supporters, volunteers, fundraisers and especially our hospice team.

“St Teresa’s is a family and we are so lucky to have such dedicated, committed and loyal supporters who really are at the heart of our organisation.”