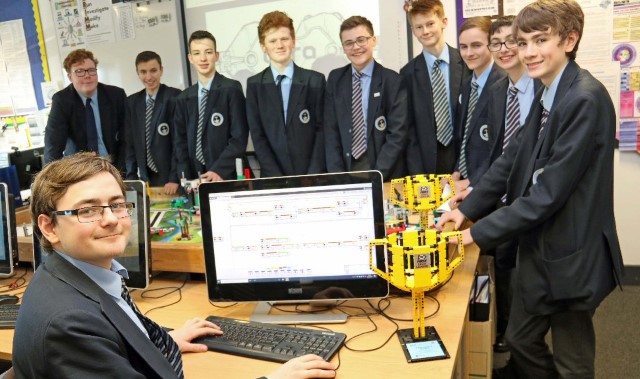 STUDENTS have placed another brick in the wall as they strive to become the world’s best Lego robot builders.

They will now take part in the national finals, due to be staged in Bristol at the end of the month, vying for a place at the world festival in Greece and America.

Using computer software and Lego Technic blocks students have just two and half minutes to complete a series of missions for which they are awarded points. They scored 305 points to take the regional accolade. At the final they will also have to make a presentation and demonstrate they can work as a team.

Carmel College computing curriculum leader Simon Roberts said: “We started the club in 2009 for Year 7-11 students but this is the first time we have reached the national finals, which we are all thrilled about.

“Engineering company Jacobs and the school’s PTA are sponsoring us at the national finals. It’s a great competition; students might fail in any one task but eventually, when they succeed, the process builds their resilience, grit and determination to solve problems.”

Student Josh Connor, 14, said: “It does help you adapt to any problem and work with other people in a variety of lessons. We are all very excited about the prospect of going to Bristol and trying to qualify for the world festival.”

Mr Roberts said: “Hopefully we are looking at the next generation of computer programmers and engineers inspired by their love of Lego.”

Carmel College principal Mike Shorten added: “It’s a great reflection of the dedication of the staff involved but even more exciting to see the student team thrive and succeed in the new world of robotics.”