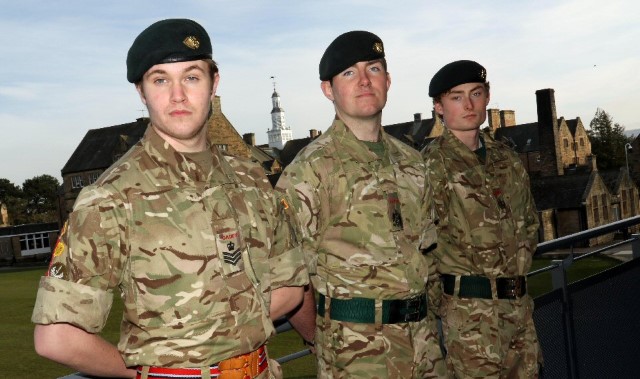 A SCHOOL’S combined cadet force is celebrating after three of its company were recruited by the Lord-Lieutenant, the Queen’s representative of the county.

At the end of last year, the trio were rewarded for their Combined Cadet Force efforts by being named Master Cadets.

The Lord-Lieutenant appoints a number of cadets each year, from across the Lieutenancy area, who assist her when she is carrying out her duties, including meeting visiting members of the Royal Family and presenting honours and awards on behalf of Her Majesty.

This year Mrs Snowdon has appointed all three cadets from Barnard Castle School  recognising their outstanding contributions to the aims and spirit of the Cadet Force.

Major Caroline Connor, who commands a school CCF force of close to 200, said: “The Lord-Lieutenant is a person of standing and influence in the community and this is an incredible honour for our students and the school.

“The office of Lord-Lieutenant dates from the first appointment by King Henry VIII in 1549 and has its origins in the military when the holder became responsible for raising local defence forces to maintain order. Today, the traditional link with the military is preserved through the Lord-Lieutenant’s association with the Reserve Forces, Cadet Forces and other voluntary organisations.”

After their records were officially reviewed, the cadets each took part in Zoom interviews with Cadet Force officials Lt Col Ian Clyde and Col Varn Jassel, in which they were asked questions on cadet life, etiquette and their views on performing the proposed duties.

Major Connor said: “Cadets are selected for making an outstanding contribution and we are all absolutely delighted that their peerless records, applications and successful interviews have led to these prestigious appointments, a first for Barney.”

For all three students the appointment provides an invaluable boost as they plan future careers in the Armed Forces.

Kieran hopes to follow in family footsteps as his father is ex-REME and mother a former nurse in the Queen Alexandra's Royal Army Nursing Corps.

“I have always wanted to go into the army,” the 17-year-old boarding student said. “I’m hoping to complete a university apprenticeship in electrical engineering, then a career in the REME. Being selected for Lord Lieutenant’s duties has given me a huge sense of pride.”

Fellow boarding student Hamish is also planning a career in the army where he will become the fifth generation of his family to serve in the military.

The 18-year-old son of a retired colonel in the Royal Army Medical Corp and nurse in the Queen Alexandra's Royal Army Nursing Corps, has his sights set on the Household Cavalry, a regiment steeped in the tradition of the Lifeguards.

“None of us expected to be successful and it is great for Barney’s CCF,” said Hamish who is currently going through the selection process that hopefully will lead to Sandhurst. “It is unheard of for Barnard Castle School to provide the Lord Lieutenant with three cadets and after missing out on a lot of CCF activities in the past year because of COVID, it certainly makes up for that.”