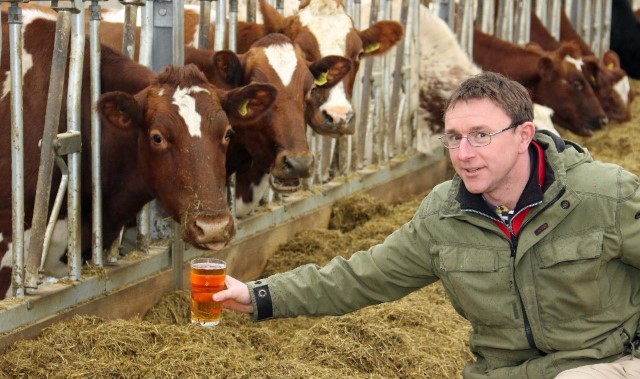 DRY January will be leaving the herd unmoo-ved as they turn to the humble apple to fortify themselves against infection.

Organic milkers at Acorn Dairy are thriving on a tipple of apple cider vinegar, a natural antiseptic and immune system booster.

Somatic cell counts – the established indicator of infections in dairy cows– have already plunged 20 per cent improving cows’ ability to fend off a host of ailments, including mastitis, foot injuries and aiding recovery in difficult calvings.

“OMSCO arranged a study trip to visit organic milk producers in America and the single biggest thing to come out of it was the use of apple cider vinegar,” he said.

“Over there it’s used to prevent and also cure a range of ailments. After a bit of internet work it became apparent it has applications in other parts of agriculture.

“Much like homeopathy, there is little hard scientific proof as to how it works. It does contain a high level of Vitamin C, which has an antiseptic affect. Thankfully in our case it is having a positive effect.

“It will be interesting to see if the effects are as great during the summer grazing season when cows have access to fresh grass.”

Acorn rears its 360 strong herd completely naturally on grass grown without chemical fertilisers and without using concentrated feeds and antibiotics.

If antibiotics have to be used, then the cow has to be taken out of milking for six days until the drugs are out of its system.

“Our cows can graze 24 hours a day on feed made from grass silage, beans, rolled wheat, and the apple cider vinegar,” said Graham. “We also demand less from our cows, who each produce 6,500 litres of milk a year compared to traditional levels of up to 10,000 litres.

“The cows love the addition of apple cider vinegar and we were delighted to see such a marked impact with a 20 per cent reduction to the somatic cell count. It must be the cider because that is the only thing we have changed.”

“This region is experiencing a gradual depletion of sodium in the soil and grass. We therefore have to ensure the cows have access to salt and they go mad for the rock salt, which keeps their mineral levels right and is another natural way of boosting the cows’ immune system.”