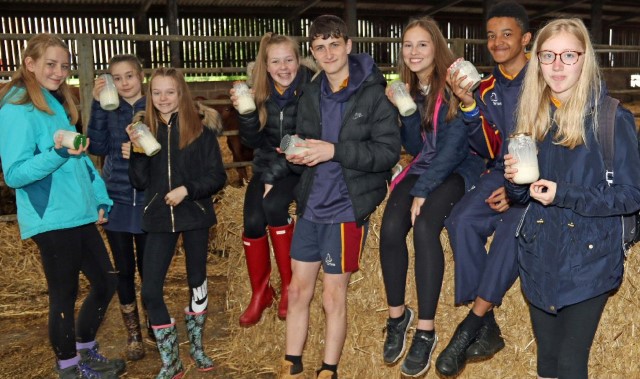 GREEN thinking pupils have been given a taste of organic farming by the cream of the region’s dairies.

Pupils from Kings Priory School were given the full tour of Acorn Dairy, Archdeacon Newton, near Darlington, by directors Caroline Bell and Graham Tweddle.

As well as meeting the herd of shorthorn cows and their calves, the Tynemouth pupils were shown the processing and bottling plant and how the farm uses manure to fertilise the soil naturally.

They were also given the chance to make butter from Acorn cream and enjoyed hot chocolate made with the farm’s organic milk.

Mrs Jessup said: “As a society we have moved away from natural and it is time we were moving back. It is really important to me that the milk we use is organic. I think of the children at school as my own and they should have the best food we can possibly give them.”

Mrs Youll added: “The children are becoming increasingly conscious of the chemicals and antibiotics in our food. Visiting Acorn Dairy shows them it doesn’t have to be that way and it has really opened their eyes to the benefits of organic farming.”

The organic farming movement rejects artificial feeds, insecticides and the over-use of antibiotics in favour of natural processes.

Acorn Dairy decided to convert to organic 20 years ago and has built up a loyal following of 4,000 doorstep customers, schools, cafes, restaurants and supermarkets right across the North-East and North Yorkshire.

Research has shown organic milk to be much richer in antioxidants, healthy fatty acids and Omega 3 as a result of the herd feeding on grass and clover.

Acorn’s herd offers a natural rate of milk production which is less intensive allowing the cows to live longer, happier and healthier lives.

Mrs Bell said: “We are always delighted to show young people around our dairy and are thrilled when they show such a keen interest in organic farming and animal welfare. The future is theirs and they have it in their hands to mobilise further change.”