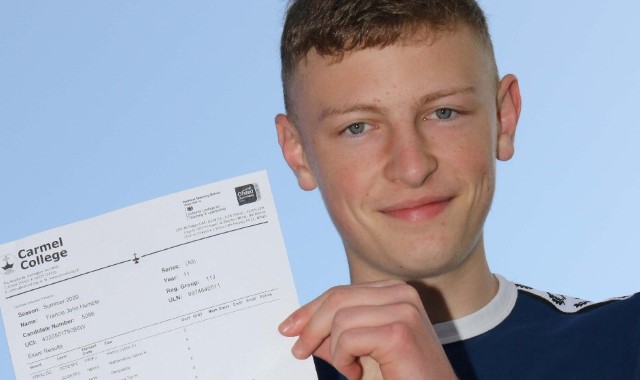 CAMPAIGNING student Francis Humble had plenty to shout about when he collected a brace of top grades to set him on a career path close to his heart.

The 16-year-old student at Carmel College, Darlington, secured seven 9s and three 8s and will now study A levels including biology, chemistry, maths and history as he works towards becoming a heart surgeon.

“It is really personal to me because my nan had to have heart surgery which saved her life,” said Francis, of Ingleton, who has just finished his term as Darlington’s Youth MP

“The heart and lungs have always intrigued me and working in cardiology would be amazing as it is so life-changing.

“I had a fantastic time as Youth MP, which I owe to Carmel. I even got to speak in the House of Commons, which doesn’t happen to a young person every day. I also really enjoyed campaigning and helped secure free school breakfasts for disadvantaged primary school children.”

For chemist Archie Appleton results’ day had extra fizz as he secured 9s in all ten subjects. “I was completely surprised and wasn’t expecting to do that well,” said Archie, who also loves art, enjoying pencil drawing in particular.

“Chemistry has always been my favourite as I love experimenting and testing. It’s why I like art as well as it’s creative.” He will now study A levels in chemistry, art, maths and geography.

Learning reached a crescendo for musician Joshua Sebastine as he collected nine 9s and a grade 8.

The 16-year-old will also stay on at Carmel College, Darlington, to study A levels in maths, physics, chemistry and biology with a view to reading medicine at university, possibly Cambridge.

“With everything that has been going on it was such a relief to open my GCSE results and get the grades I wanted,” said Joshua, who is about to take his grade 8 piano and also plays the clarinet.

“I am thinking of becoming a doctor, possibly a surgeon, and was due to have some work experience at Darlington Memorial Hospital but it was cancelled because of COVID.”

Athlete Sarah Wilcock sprinted over the GSCE line to collect eight 9s and two 8s, the perfect stepping stone to her dream career of becoming a doctor.

She will also stay at Carmel College to study A levels in chemistry, biology, maths and PE with a view to reading a degree in medicine, hopefully at Newcastle.

"I think it would be great to have a career helping people,” said the 16-year-old, who competed in the English Schools National Finals in the heptathlon and is a swimming coach.

“I have been inspired by the way the NHS has worked so hard helping people through the COVID pandemic.”

Fellow swimming coach and water polo player Matilda Spellman was also on the crest of a wave after securing four 9s and five 8s. She plans to stay at Carmel to study A levels in biology, chemistry and history as she hopes to study a law degree and a career in family law.

Results day was a family affair for the Bryants. Just a week after Amelia gained four A* A levels, her sister Isabelle gained nine 9s and a grade 7. She will study A levels in chemistry, biology and maths and an AS in physics, ideal subjects for her to fulfil her aspirations of reading a medical degree and becoming an anaesthetist.

“Medicine encompasses everything I like about studying and would want from a career,” said Isabelle, who dances ballet, sings, and plays the piano and violin in the County and Darlington Youth Orchestras. Her mum and dad, Laurence and Edwina, were also on hand as she opened her results. Mr Bryant said: “I am really impressed with both our girls, with everything that has been going on, they have worked really hard and deserve their results.”

A career in business law is beckoning for Chloe Lubuku after she secured eight 9s and two 8s. Her next step will be studying A levels in chemistry, maths geography and French, which she used to speak while living with her Congolese father.

Born in Italy, she now lives in Hurworth and has her eyes set on studying law at either Cambridge of Oxford. She said: “I fancy business law because there are so many areas you can go into. I’d also love to live and work in Australia at some stage.”

Student Emma Burgess hopes to delve into the criminal mind after securing five 9s, three 8s and two 7s. She will study A levels in maths, psychology and history and is considering reading a degree in criminology. “I would love to understand why people commit crime and what is in their minds when they do it,” she said.

Principal Mike Shorten said: “It is lovely to see so many smiles on students’ faces and because the weather was fine being able to share the moment safely outdoors with parents.”

Chief Executive of the Bishop Hogarth Catholic Education Trust Maura Regan said: “We are thrilled and delighted that common sense prevailed and students were given the right grades by the people who know them best.”