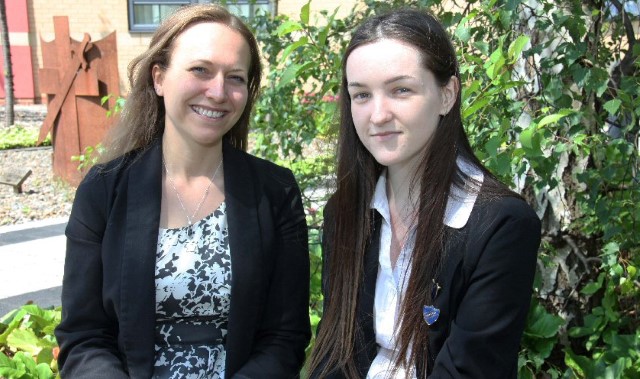 TWO students are to have their work on legal rights for women acknowledged in a report to the United Nations.

Head girl Chelsea Reidy and Hafsah Afzal, who are studying A level politics at The King's Academy, in Coulby Newham, got the chance to work with North East lawyer Cris McCurley during their sixth form's community action week.

Cris, who is Head of the International Family department at Ben Hoare Bell, in Newcastle, and specialises in human rights, invited the girls to spend a day at her office to experience a working legal practice.

Cris is a member of the United Nations CEDAW (The Convention on the Elimination of all Forms of Discrimination Against Women) shadow report writing group and is taking the legal lead on a report due to be submitted next year.

The report responds to the British government’s failure to take corrective action over cuts to Legal Aid, which three high level committees claim are discriminating against minority ethnic women and victims of domestic violence.

Chelsea, 17, of Marton Manor, explained: "Cris was working on the report in response to the cutting of Legal Aid and its impact on women, especially immigrant women who are victims of abuse but can’t speak English when they come here.

"We analysed a report by the Public Accounts Committee which looked at the plight of women refugees who come here and need to make a legal case to stay but then can't get legal representation through Legal Aid. We made notes and passed them on to Cris for her report to the UN."

The students’ names will appear as contributors in the CEDAW shadow report writing group submission to the United Nations.

“Chelsea produced a fantastic piece of high quality work, which will be extremely useful and will definitely be used in the report for the UN,” said Cris.

She added: “I was delighted to have the girls at the practice. I was nearly in my 50s before I got involved in anything for the United Nations, so this was a great thing for them to contribute to and they will be able to include it in their CVs.”

The students' politics teacher Jenni Yuill said: "Chelsea and Hafsah are very committed to their subject and realised this was a fantastic opportunity for them to learn more about human rights from a specialist lawyer working in the field. They now have a very good understanding of the impact the withdrawal of Legal Aid is having."

The work experience came during a year in which the students were exposed to a programme of political issues delivered by a range of guest speakers to the academy.

Chelsea added: "You wouldn't normally be aware of a lot of the issues going on in our country, some of which are quite scandalous. I'd already decided I wanted to do law at university and now I definitely know I want to specialise in human rights."

The King's Academy politics lectures programme will continue from September with some compulsory sessions to develop students' awareness and understanding, and other optional lectures during enrichment time.