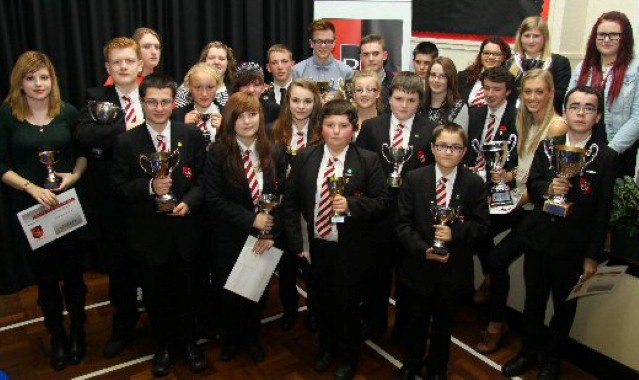 A RED Devil urged students to be courageous as they take a leap of faith into their futures.

Jump leader for the Red Devils freefall parachute display team Andy Braye told Darlington School of Mathematics and Science students that they should aim to conquer their fears.

Andy, 29, of Middlesbrough, at 16 was the youngest member of his platoon in the British Parachute Regiment.

He told Year 11 school leavers, who were among an audience of more 250 students, teachers and parents at the school’s third annual prize-giving ceremony: “The truth is that the future can be scary.

“Leaving school is an exciting time but also a time to overcome any fears you have about what the future holds, to be courageous, prepare for what you want to do and act upon it.”

Before handing out the awards Mr Braye recalled his tours of Iraq and Afghanistan and his decision to train as a skydiver after leaving the army.

“There were many times when I was afraid; my first parachute jump when I was just 17; when our platoon was given orders to move into Basra to fight Saddam Hussein’s guards; and when on my third freefall jump my parachute malfunctioned sending me into an uncontrollable spin,” he said.

“Luckily I survived all three, but I admit I was scared and that is the first step to overcoming any fear in life; admit you are scared, prepare to overcome it and then act.

“And this applies in every aspect of life. You need to work hard, be respectful put time and effort into preparing for what you want and then act upon it. Be courageous and never let fear ruin your life.”

Alongside Year 11 GCSE certificates, prizes and trophies were also awarded for academic and sporting excellence, as well as individual trophies for services to the community, dedication, determination, perseverance, citizenship and personal achievement.

A special award was made in honour of former DSMS student Flight Lieutenant Steven Johnson who was killed in action when his plane exploded in Afghanistan in September 2006 alongside 13 fellow servicemen.

“Physics was his favourite subject and it is very fitting that the award for this subject is made in his name. It is a very proud and emotional moment for all our family.”

Multiple award winners included George Plumb, 15, of Darlington, who received four individual subject prizes in maths, science, ICT and modern foreign languages, as well as the Middleton Greathead Cup for progress, the James Barningham Award for humanities, the F C Coleman Award for excellence in English and the Dr J Lloyd trophy for excellence in science.

Entertainment for the evening was provided by Lucas Buckley on viola, Rebecca Richmond and Lucy Stead singing On my Own and Lauren Hebden, Connor Tomlinson, Seniz Hill, Hannah Braybrook, Dominic Fairbridge, Ellie Jeffryes, Chloe Wheeler and Taylor Wilson with a rendition of Get Happy - Happy Days are Here Again.

Head teacher Calvin Kipling said: “This is by far the best evening of our school year when we can celebrate the success of all our young people.”

“It’s also a pleasure to welcome back our recently left pupils, the vast majority of who have gone on to further education making them our second most successful year group ever in the school’s 50 year history.”

Mr Kipling also praised the teaching staff, governors, pupils and parents for all their hard work in helping the school move towards the top of the national league tables.

Summing up the evening chair of Governors Dr David Hall added: “Once again we are celebrating another very successful year at DSMS.

“Two years ago we struggled to recruit to our school, now our numbers have improved dramatically, our exams results are getting better and better and just as importantly we are seeing people comment on the good behaviour and social skills of our pupils.”

Trophy and award winners for 2013