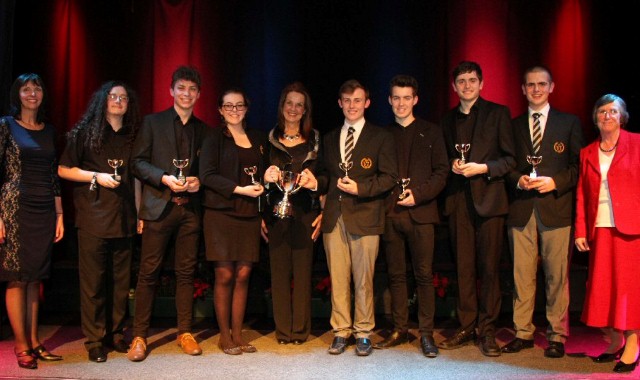 A GROUP of talented musicians ended the year with a crescendo after being awarded a school’s highest honour.

The band of students at Carmel College, Darlington, became the first group to be awarded the coveted John Caden.

Normally awarded to a single student, the award recognises contributions which make a difference and enrich life at the college.

Principal and Carmel Education Trust Chief Executive officer Maura Regan told a packed audience of family and friends: “It is my privilege to make this award but this year it proved so difficult.

“This group of musicians have made such a difference and had such an impact on the College that, for the first time, I had to award it jointly to them all.”

Head boy Tom Jackson, who was among the group called Carmel Pit Band, said: “We feel incredibly privileged to collect this award, particularly when all the students here at Carmel contribute so much to make the College outstanding.”

The award was the culmination of a night of accolades in which last year’s Year 11 and 13 students were rewarded for their endeavours.

Guest of honour Maria Matthews, a former Headteacher and current Director of the Carmel Educational Trust, presented the awards.

She told the audience: “At this wonderful College you have received the very best of everything: the very best individual care and support and the very best learning experience. The fantastic team here supported you and enabled you to flourish; giving you the self-assurance to move on. We are rightly proud of your academic achievements.”

“You are now independent, resilient and responsible young people – ready and able to survive in a very tough world. And you wonderful young people are also very aware of the needs of others – not just in your own community but further afield in the wider community and across the world.”

Visitors were also treated to an evening of readings and musical performances including a festive rendition in Spanish by the staff.

Miss Regan added: “All of our staff and students contribute hugely to the vibrancy that exists at Carmel College and tonight is deserved recognition for all of their efforts.”