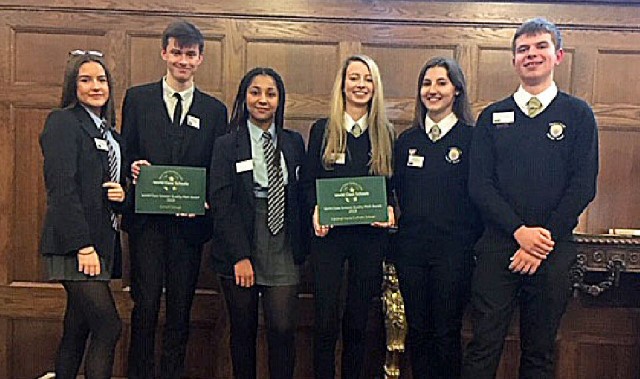 STUDENTS and staff are celebrating after two North-East Catholic schools were awarded the ultimate accolade pushing them into the realms of world-leading status.

The coveted accreditation, enjoyed by only a handful of schools in the UK, was awarded formally at a glittering ceremony at the Governors’ Hall, St Thomas’ Hospital, London, by Professor Chris Bonell, of the London School of Hygiene and Tropical Medicine.

Both schools’ reputations went before them and they were nominated for the award by colleagues from other parts of the country.

Heads of year nominated pupils to be considered for World Class School working teams, the successful candidates being chosen by interview.

A team of students set to work auditing every aspect of school life against a checklist of more than 50 standards that a school needs to achieve World Class School status and thrive in the modern world.

They delved into the curriculum to check it was relevant, accessible and would engender a love of learning in a range of subjects from maths and science to performing arts and extra-curricular activities.

They also analysed the teaching community witnessing the high levels of continuous professional development that keeps teachers at the top of their game and produced a 15 minute video capturing the unique nature of their school days.

Chosen from 25 schools taking part in the initiative, they became one of just eight teams to travel to Coventry to help improve facilities at Riverbank Academy, a school for children with special educational needs and disabilities.

Carmel College Vice Principal Melanie Kane said: “I am so proud of the students who have done a brilliant job capturing the spirit of our school and demonstrating what makes it World Class.”

Cardinal Hume Head teacher Nick Hurn said: “I am delighted that the work of staff and students is being recognised in this way. Every single member of our school community has contributed to this award in the work they do every day to make Cardinal Hume an exceptional place to study and work.”

All the students agreed.

Joel said: “This has opened my eyes to all of the work that goes on behind the scenes at Cardinal Hume to make sure every child reaches their potential.”

Ella added: “I realise how well supported we, as pupils, are and the fantastic range of opportunities that are on offer here at Cardinal Hume. The staff give up so much time to help us.”

Kate, who travels more than 30 miles from her home in Peterlee to Darlington every day to attend sixth form and hopes to join the police one day, said: “I knew I had to go to Carmel after one visit and it was fascinating picking apart how the school is run to find out why I felt like this instinctively.

“It opened our eyes to what makes Carmel College such a great school and the relentless amount of work conducted by the staff.”

Joshua, of Darlington, added: “I have been here since Year 7 and seen a lot of change but the school always manages to keep the essence of what makes Carmel such a great place. Nobody drifts through unnoticed and teachers genuinely care about every student. I have made some great friends and the teaching is top class.

“In sixth form the amount of support you get is astounding and tutors never let you struggle, offering as much help as you need.”

The working parties are now feeding back to teachers and students what they have learned from the experience which will be used to enhance further life at the schools.

WCSQM director Miranda Perry said: “It was tremendous to see how positively students from Year 6-13 worked together to achieve their goals. We were incredibly impressed with the high standards of their work and you can absolutely see why they were nominated as being world class.

“Many secondary schools in England already judged outstanding by Ofsted have moved beyond this judgement. They have improved student progress, aspiration and achievement to such an extent that their standards rival those of the best schools internationally.”