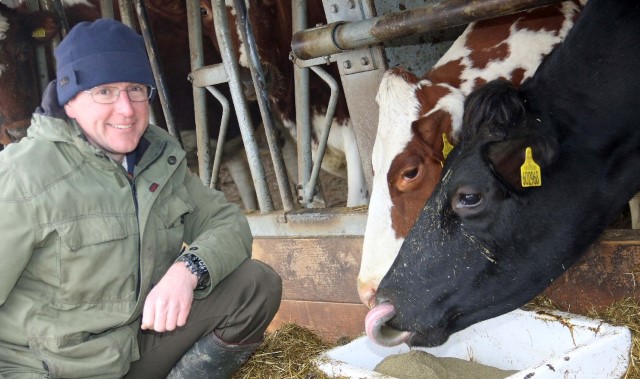 A TASTE of the ocean is being offered to organic cows to keep their health ship-shape and free from antibiotics.

The 500-strong herd at Acorn Dairy is having its already rich diet further enhanced with the addition of seaweed as a means to introduce vital trace elements to their winter diet.

In the spring and summer the short-horns graze on nutrient-filled grass grown free from any added chemicals. Research has shown organic milk to be much richer in antioxidants, healthy fatty acids and Omega 3 as a result of the herd feeding on grass and clover.

In the winter stock can miss out on certain nutrients if they are simply fed silage, so Acorn Dairy has come up with the perfect diet which now includes seaweed, renowned for its iodine content, to boost cows’ immune systems.

Acorn cows can graze 24 hours a day on the feed in stock sheds that also feature automatic grooming brushes and memory foam mattresses.

Dairy owner Graham Tweddle said: “The aim is to keep the livestock happy and healthy so they don’t fall ill and require antibiotics. If antibiotics have to be used then the cow has to be taken out of milk production for six days until the drugs are out of its system.

“The feed is expensive but the cows love it and it certainly boosts their immune systems. Their milk then benefits customers by being higher in antioxidants and iodine which helps brain development.”

Acorn, which became organic more than a decade ago, enjoys an enviable reputation for conservation, compassion and commercial enterprise.

“We also demand less from our cows, who each produce 6,500 litres of milk a year compared to traditional levels of up to 10,000 litres,” added Graham.