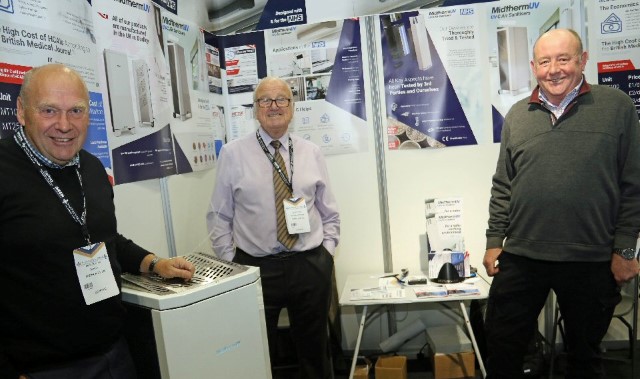 A COVID killing machine is set to reduce infections and save the country millions of pounds at a time of soaring absenteeism and energy bills by purifying the air without letting in the cold.

The new device takes in room air, passing it over germicidal UV-C light which neutralises the threat. The clean air is then pumped back into the room, a process that on average takes just 20 minutes.

Engineer Barry Paterson, of Burton Salmon, between Leeds and York, who worked for 20 years in the sustainable energy industry, came across the technology while looking for ways to protect his elderly in-laws from COVID.

“I needed something that would look after my in-laws who are in their 90s,” said Barry, who sits on the Institute of Mechanical Engineering COVID taskforce and is considered a leading expert in UV-C sanitising. “I researched the topic and made a first prototype version myself.”

Barry enjoyed a successful career in biomass powerplants and knew Richard Andrews, CEO of Dudley family owned manufacturer, Midtherm Flue Systems Ltd. He approached Richard about making a UVC sanitiser in the UK during the first week, of the first lockdown. Within a week the new company Midtherm UV Ltd was established.

“It took about 18 months from scratch, half of which we have been in talks with the NHS,” said Barry.

The MT units are simple, reliable and cheap to run. “Just plug-in and play,” said commercial manager John Cooper, also of Burton Salmon. “Lamps last 9,000 hours, which equates to a year if they are on 24/7, starter units last 100,000 hours and the fans are modular and easily replaced.”

They are also more effective than ventilation which blows around the pathogens and leads to greater heating energy costs at a time of spiralling prices and fears for the environment.

Ventilation also fails to eradicate the source of the infection allowing COVID wards to become full of virus, an increased risk to patients and staff.

The technology behind the disinfecting qualities of certain frequencies of UV light date back to 1837. UV-C rays, in the range of 100-280 nanometres, have a strong germicidal effect on bacteria, viruses, spores, fungi, moulds and mites as they destroy their DNA, damage their reproductive system and prevent them from replicating. UV-C is already used widely in food and pharmaceutical industries.

The intensity of the UVC radiation is designed to “kill” a wide range of bacteria and viruses including the Bacillus, Coli, Clostridium, Legionella, Vibrio, Salmonella, Listeria, Pseudomonas, Staphylococcus, Streptococcus, SARS-COV-2 , influenza, measles and respiratory virus.

Because the germs are inactivated there is no need for expensive high-efficiency particulate air filters, which become blocked, impede flow and efficiency and then becomes a bio-hazard needing the expense of clinical disposal.

In a typical district general hospital of 400 beds, health care acquired infections cost around £500,000 a year, staff sickness even more.

Every year, nationally, 80,000 frontline staff days are lost through healthcare acquired infections, as well as 800,000 patients infected with 26,000 deaths – a total cost to the NHS of £3bn. It is currently being evaluated by Maidstone General Hospital in Kent, in its Rapid Access Point (RAP) triage centre.

Negating the need to ventilate also saves thousands of pound on heating bills and is better for the environment as it lowers carbon emissions.

The units, which handle 750m3/hr, have been specified for ease of use. A green light tells operatives it is functioning correctly, a red light shows there is a problem. A coarse pre-filter collects dust which is made safe by the UV-C light.

The benefits to clinicians are enormous. At the moment hospital treatment rooms, used for things such as spirometry and endoscopy, have to stand idle for at least an hour for the air to change naturally.

“Our units amount to forced ventilation taking the time down to as little as 20 minutes, depending on the size of the room, about the same time as it takes staff to wipe down the surfaces, allowing more patients to be seen in a day,” said Barry.

It is similar story with GP surgeries and dental practices, some of which have been able to return to normal services because of the MT units.

Nursing homes and hospital wards could also avoid winter vomiting bugs such as norovirus and e-coli because the units neutralise the threat.

The units have been tested for safety by the Freeman Hospital in Newcastle to ensure no potentially harmful light escapes from the casing.

The Kent Trust commissioned independent air testing on a ward, in the RAP centre, in a waiting room and in the café. The RAP room saw a 70 per cent reduction in bacteria, which is even more difficult to kill than virus.”

The National University of Ireland Galway put e-coli into a machine’s inlet and petri dishes at the outlet, testing with the Philips UVC lamps on and off. With the lights off they discovered e-coli and staphylococcus but nothing when the lamps had been on.

A report was produced by Dr Daniel O’Toole, of the School of Medicine, in cooperation with Dr Ronan MacLoughlin CSO of Aerogen.

They found that results demonstrated conclusively the ability of the Midtherm MT250 air sanitiser “to destroy 99 per cent of common airborne pathogens very effectively in a single pass”.

“This holds true for a wide range of pathogens that cause diseases within the environment, such as TB, measles, Norovirus, diphtheria, influenza, SARS-Cov, MRSA and Legionella,” their reported stated.

Consultant engineer Frank Mills, who has worked in infection control for all of his career, also sits on the COVID taskforce.

“The technology has been in existence for years but MidthermUV is the only company which is listening, looking and applying its research to specific needs,” he said.

“Humans shed 3,000 dead skin flakes and hour so anything with a filter soon loses efficiency and becomes a biohazard. This device reduces the viral load and deactivates it which is important to the NHS. It is particularly important in respiratory wards and dentistry. Going into winter it will be crucial to reducing the numbers of people having a variety of infections.

"In 2020 the World Health Organisation identified that COVID was an airborne virus transmitted 90 per cent of the time through the air. The MT unit recirculates the air rather than having to open the windows which is important given the rising energy prices and the air becomes self-cleaning, which is also energy saving, which will allow us to return to normal.”