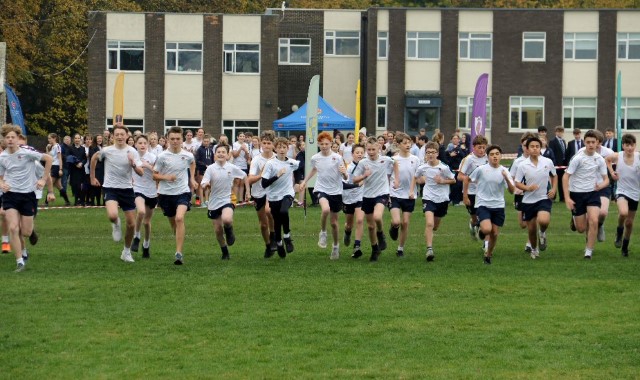 AN historic charity run got back on track after being disrupted by global pandemic.

Parents returned in force to the back fields of Barnard Castle School to support students as they tackled the 130th Barnard Run.

At stake was individual and house pride as children from the Prep and Senior Schools fought it out on specially laid out courses.

The annual run, and its supports races the Barney Bash, raises hundreds of pounds for charity. This year proceeds will go to Mary’s Meals.

Senior boys and girls compete in a four miles run while intermediate and junior races cover 2.5 miles. Pre-Prep and Prep school children take part in their own shorter races.

The whole school turns out for the Barney Bash, which normally acts as a qualifier for the main run but this year is being held after.

The Lloyd Evans Cup, for senior boys, was won by Frederick Langton, while the Turnbull Shield for senior girls was taken by Anna Coyle

In the intermediate races, the Blackett Cup, for boys, was taken by Harry Hulley while the Wilford Cup, for girls was won by Isabelle Brown.

The Alastair McCulloch Cup, for junior boys, went to Josh Dickson, while Ella Turner won the Geoffrey Turnbull Shield for the junior girls.

Barnard Castle School headmaster Tony Jackson said: “We were absolutely thrilled to welcome back parents to this historic event which has always been one of the most popular in the calendar.

“Competitors of all ages and abilities really committed to their respective events and there were some fine efforts which were fully appreciated by spectators and enjoyed by the children.”