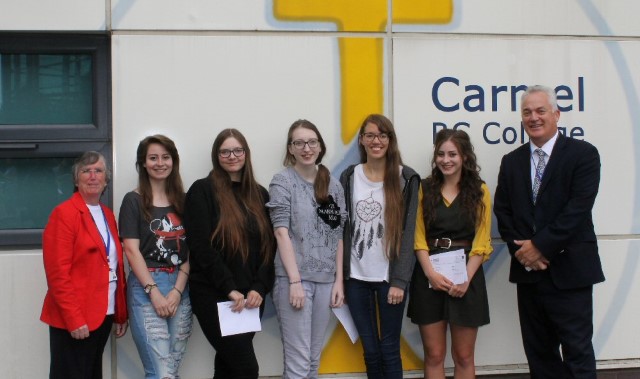 STUDENTS and staff were celebrating at Carmel College in Darlington this morning after a year-on-year improvement in A-level grades coupled with some outstanding sporting achievements.

In the key measure for A-levels, 55 per cent of students at the college achieved A*, A or B grades.

Principal Mike Shorten said: “We’ve had a fantastic set of results, showing continued improvement on last year, and an excellent success rate in students getting into the university of their choice.”

He added: “We are also really proud that so many of our students have achieved academic excellence while making a huge commitment to extra-curricular activities, such as competing at a national level in a range of sports.”

Ryan Stacey arrived at the college wearing a Napoleon hat because he’d been studying the Napoleonic Empire and French Revolution in History, and it’s Napoleon’s birthday today. Ryan achieved an A*, plus two A’s, and has been four times the county 100 metres champion. He will now study history at Newcastle University.

Alana Prior, Lucy Erin-Hunter, Layla Bell, and Adam Billany all did well in their A-levels as well as making their mark on the national sporting scene.

Alana is the country’s third-ranked road cyclist in the national series and has applied to take part in the World Junior Championships next month. Alana, who combined her academic work with going home at lunchtimes to train on a static bike in her kitchen, will study chemical engineering in Leeds.

Lucy-Erin is the Northern 1500m champion and was selected to represent England in an international in Wales. She is to take a law apprenticeship in Leeds.

Layla has represented England and Great Britain at 100m and 200m and won a silver and bronze medal at the World Catholic Games. She plans to study physiotherapy in Manchester.

And Adam, who has cerebral palsy, is a talented sailor, who was fourth in the European Youth Paralympics. He also took part in the Open World Championships in Holland, competing against all able-bodied as well as disabled sailors of all ages. He will be studying Sport and Exercise Science in Newcastle.

Mr Shorten said he was also proud that youngsters from schools across Darlington had chosen to study for their A-levels at Carmel. Chloe Summers, who came from St Aidan’s Church of England Academy, became head girl and has earned a place at Oxford to study history.

Another former St Aidan’s pupil, Emma Harland, achieved three A* grades, and will go on to study Maths in Durham. She said: “I’m shocked to have done so well but I’ve loved being at Carmel – it’s a brilliant college.”