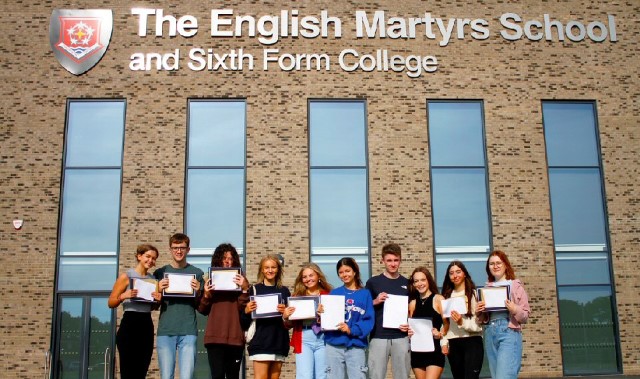 STUDENTS from the school, which is a member of the Bishop Hogarth Catholic Education Trust, were congratulated their GCSE results in another challenge year of the pandemic.

Headteacher Stephen Hammond said: “We are extremely proud of all of our students. I want to take this opportunity to thank the students and staff for all of their hard work throughout their time at our school and I wish them good luck in the future.

“As we reflect upon their time with us, we are filled with immense pride. The strength, resilience and fortitude demonstrated by these young people is something to behold. It is qualities such as these which will take them far and we have no doubt that our students are moving on to bright futures.”

Mr Hammond said: “We are overjoyed that so many of our students are returning to study a range of A level and BTEC qualifications with us in our sixth form.”

Max Denning was incredibly happy with his nine grade 9s and one grade 8 with Elena Cain collecting seven grade 9s and three grade 8s, both are looking forward to the challenge of sixth form.

Another two students joining EMS6 are Millie Addison who picked up six grade 9s and four grade 8s and Sam Duong who was very pleased with his five grade 9s, two grade 8s, one grade 7 and one grade 6.  Sam is looking forward to studying Maths and Further Maths as part of his course choices in September.

Joel Holvey, who was a member of our Improtech Elite Football Academy, has joined Rotherham United and achieved nine grade 5+ at GCSE.

After overcoming many challenges and with the help and support of teachers and support staff,  Kristian Emmerson leaves the school to study at the College of Further Education after achieving one grade 9, grade 4 in both Maths and English Language, grades 5 and 4 in Combined Science and a grade 3 in English Literature.

A special mention went to two students who joined in Year 11, Hallie Bennison and Daniell Ong, who achieved 14 GCSEs at grade 4+ between them.