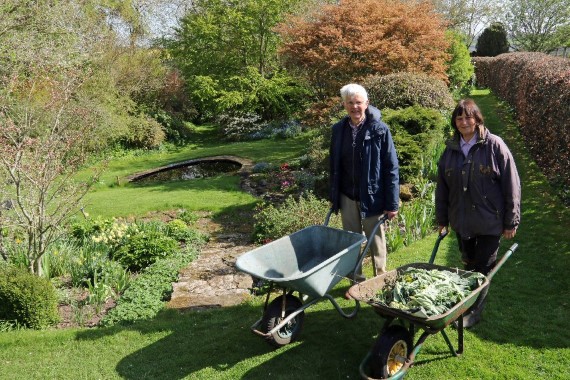 HISTORIC gardens are opening their gates once again as fundraisers spring into action to help a charity.

Val and Ian Hepworth will be opening their glorious gardens to help St Teresa’s Hospice as it rebuilds its reserves following the damaging pandemic.

The couple have lived in the 17th century Manor House, in Richmond Road, Skeeby, near Richmond, for more than 40 years and ever since have been restoring the gardens, originally planted by the influential Pease family, who were notable Quakers, bankers and founders of the railways.

Visitors are being invited to an open event on May 6 and 7, from 11am to 5pm, to enjoy the gardens and refreshments, with entry by donation.

The gardens feature steps, slopes and uneven ground, so wheelchair access is limited. Parking is in the village car park or at the front of the house. Val and Ian will be on-hand to greet visitors and answer questions. The annual event raises around £1,000 for the hospice.

Val, the lead trustee for the Yorkshire Gardens Trust’s conservation group, said: “We love hosting the gardens event which attracts young and old. Some people come to see the trees, shrubs and pond, other just enjoy a cuppa and a chat and it’s great to catch up with people who come year after year.

“St Teresa’s Hospice was hit particularly hard by the pandemic when events were cancelled and their charity shops had to close so it is more important than ever to support what is a very worthy cause.”

A grade II* listed building, Manor House has enjoyed a rich history since its early days as a 17th Century farmhouse on the site of a medieval home, reputedly linked by an underground passage to Easby Abbey.

A quarry, which is believed to have provided stone for the abbey, was subsequently laid out as a garden by Miss Evelyn Ada Pease (1876-1950) from 1939 and later by her niece Dr Mary Ethelwyn Pease (1892-1981) before Val and Ian took over the task.

Miss Evelyn Pease was the youngest daughter of the Darlington MP Arthur Pease and granddaughter of Joseph Pease, one of the originators of the first railway.

During the 1st World War Miss Evelyn was commandant of the Richmond Auxiliary Hospital, while her eldest brother, Arthur Francis Pease (1866-1927), was director of the N E Railway, chairman of Pease & Partners Ltd and was created 1st baronet in 1920.

Dr Mary Ethelwyn Pease was his second child and came to live at Manor House in 1956 when she retired from medicine.

The 1½ acre gardens, sheltered by walls and hedges, features courtyard, herbaceous and mixed borders, soft fruit and the quarry garden, known as The Dell. There is also a pond, shrubs, bulbs and perennials, leading to ‘The Glade’, with some newly planted trees and shrubs, and ‘The Valley’, which was originally the sunken track leading from the quarry. There is a terraced shrub rose garden, ornamental trees and a conservatory/greenhouse.

St Teresa’s Hospice needs to raise more than £3m a year to provide free in-patient and community care for people living with life-limiting illnesses and their families in Darlington, South Durham and North Yorkshire.

Its marketing and fundraising manager John Paul Stabler said: “We are thrilled that Val and Ian have decided to continue to support us this way at a time when fundraising for the hospice has never been so vital. We had incredible support from the community during the pandemic but we do still have a lot of catching up to do and this gardens event will really help.”