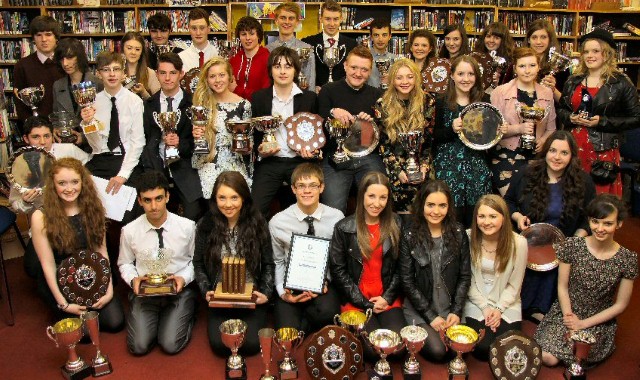 A SCHOOL has paid tribute to a teenager who died in a car accident by naming a new award in his memory at a ceremony to recognise students’ achievements.

The Tom Brown award recognises courage over adversity and was designed by his father Christopher.

“I wanted to create a fitting tribute for Tom and the idea of an award in his name just came to me,” said Mr Brown.

“St Michael’s really embraced the idea and it is a wonderful way of keeping Tom’s name and memory alive in the community.

“We hope that it will also show other families, who may be going through a similar situation, that their child can live on and leave a lasting legacy behind.”

“It’s really humbling to be the first person to receive this award,” said Stephanie, 17, of Billingham, who was honoured for facing her own personal tragedy after her mother died suddenly.

“I knew Tom and I hope he would have been happy that I was chosen to receive it.”

The award was one of dozens presented at a celebration event, hosted by St Michael’s vice principal Moira Hunt, recognising achievements and endeavour in a wide range of subject areas.

Year 11 GCSE certificates were present to all school leavers with Andy collecting the certificate on behalf of his brother Tom to a standing ovation.

Congratulating the students head of St Michael’s Academy Andrew Ramsey said: “Through partnership, trust and memories, shaped by the fabric of St Michael’s, this is a sad but also fantastic event.

“Moments like this can help to shape our destiny and tonight is an evening for everyone in the community to share their hopes and dreams for the future.”

The top award winner of the evening was James Harris who received two individual subject awards in maths and science, as well as the Stockton Sixth Form Award for the highest achieving student in the school’s history, the Citizenship Trophy, the Student Council Award and the Princess Diana Award for the desire to help others.

James was also presented with tickets to travel to London to be presented with The Princess Diana Award, for his voluntary work and for raising funds to travel to Kenya as part of an expedition to build a new school. He is the third student from St Michael’s to be honoured in 13 years.

“I am so pleased to have won six awards, they all mean so much to me,” said James, 17, of Billingham, who is to study maths, further maths, chemistry and physics at A level.