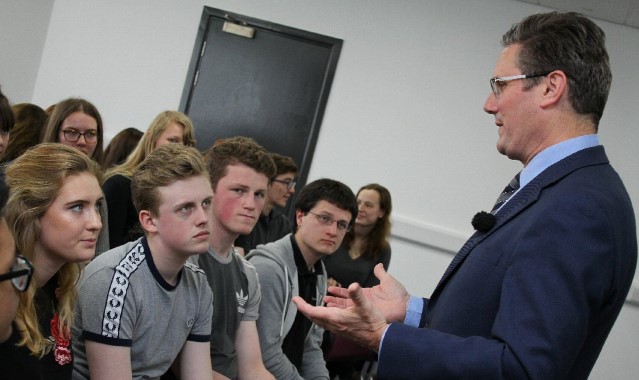 ‘GET out and be heard’ was the message from the shadow Brexit secretary as he urged students to make their votes count in the forthcoming general election.

Sixth Formers at Carmel College, Darlington, played host to Labour candidate for Holborn and St Pancras Sir Keir Starmer and Darlington Labour candidate Jenny Chapman in a question and answer session on the UK’s exit from the European Union.

The former director of public prosecutions, who started his career as an MP and shadow home office minister advising on counterterrorism and immigration, questioned students on their eligibility to vote and urged them all to register.

“This election is all about the future, your future, so it important that if you can vote you do vote and use that vote to have your voice heard,” said Sir Keir.

“It is wonderful to hear that everyone here that can vote has already registered, as young people are ignored far too much, and if you use your vote you can never be ignored again.”

Students then questioned both candidates on issues surrounding Brexit, including the proposed fines imposed on Britain for leaving the EU, how in-party unrest would affect negotiations with European countries, free movement of immigrants within Europe and fixing a divided country following the EU referendum.

“What matters now is how we leave the EU and what our relationship with Europe will look like in the future,” added Sir Keir.

“We also need to look at the state of Britain and our manifesto is one of hope, hope for young people, public services and the NHS and an aspirational future for everyone.”

“We have invited representatives from all of the main parties to talk to our students as politicians champion the future for young people who believe in integrity, respect and honesty and who are not afraid to challenge what they perceive as unfairness in policy making.

“Carmel students are actually very politically aware and I would have been very surprised if those who are eligible to vote had not already registered. Today’s visit gives them the opportunity to question and make their own valued judgements on the basis of what they heard.

“People can be quite naïve about the young and the views they have when it comes to politics but in reality they have an insight and wisdom beyond their years, especially when it comes to something as important as Brexit and the impact that it will have on their lives.”