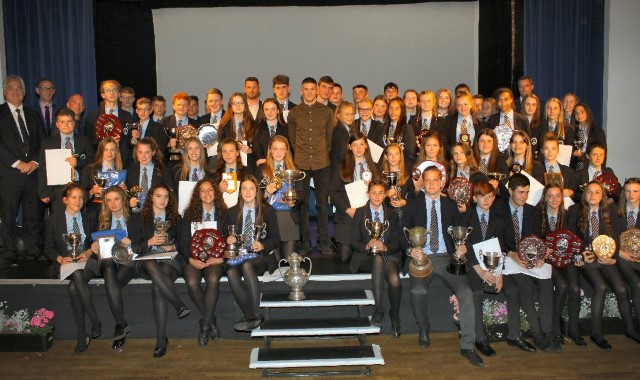 HUNDREDS of students have been honoured for achieving their sporting goals.

Pupils from Carmel College, Darlington, received a host of medals, certificates and trophies in recognition of their achievements at their annual college awards presentation, following a magnificent year of sport for the school.

Special awards, chosen by the PE department, were also made to individuals who had achieved high levels of success and who had represented their chosen sport at town, district, county, regional and national level.

Presenting the awards, special guest BBC Tees sports journalist and broadcaster Rob Law said: “We need to shout louder about our sporting successes in the North East and I hope that’s what we try to do at BBC Radio Tees.”

Speaking to students, the 31-year-old radio presenter, of Stockton, offered words of advice for success in all walks of life.

“With patience and persistence you can do anything” he said. “When I said I wanted to be a sport radio presenter people told me I’d never make a living from it, there was no money in it and I needed a plan B.

“I wasn’t the smartest, or most eloquent, so I began to believe that I would never make it – but I wanted to try.

“I volunteered at North Tees Hospital radio. I got lucky and managed to get myself invited to Radio Tees where I spent a year giving up my weekends to go and watch and learn, all unpaid, but the sacrifice was worth it.”

When a vacancy became available at the station Rob was in the perfect position to apply.

Striker Tom, 32, of Darlington, who played for Middlesbrough, Luton and Oxford before injury forced him to quit the sport, has recently graduated from the Carmel Teacher Training Partnership as a PE teacher.

“Teaching is challenging and a very different world from football but I hope to be able to use my experience and the lessons learnt from my teachers to give pupils the love of sport that they gave to me,” he said.

Hosting his first awards event as new PE Curriculum leader Lee Richardson added: “This is a very special event and an opportunity to celebrate an incredibly broad range of sports at Carmel College.”

The 'John Naisbitt' Sports Personality of the Year          Francis Humble