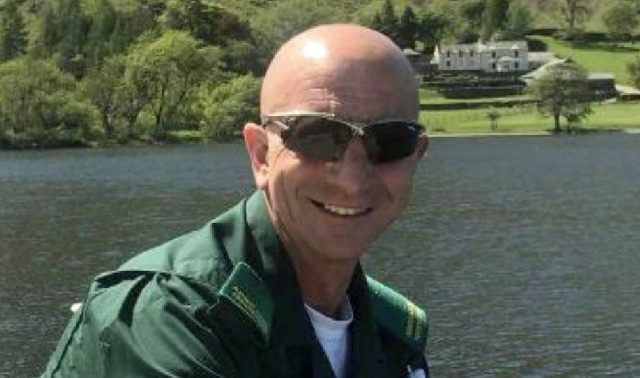 TRIBUTES have been paid to a much-loved ambulance technician after his sudden death aged just 54.

A veteran of the Falklands campaign, Chris, of Yarm, joined the Royal Navy at 17 and served with Prince Andrew aboard the aircraft carrier HMS Invincible.

Darlington-born and a past pupil of Hurworth Primary and Eaglescliffe schools, he was only allowed to go to war during the Falklands campaign because he celebrated his 18th birthday while sailing out there, where he worked as a gunner and in telecommunications.

“There were reports that the Argentinians had bombed the aircraft carrier and for several days we were very worried,” she said. “But they returned to Portsmouth in September 1982 to a glorious welcome.”

Chris stayed in the Navy for nine years and also served on HMS Raleigh, Shetland and Diomede.

He decided to leave when his first child, Emma, was born and worked as a security guard at St Cuthbert’s Hospital, Hurworth, and became good friends with the monks from St John of God’s.

After leaving the Prison Service he joined Stockton-based MediPro training and ambulance service where he worked as a technician supporting paramedics in their life-saving work across the North-East, Yorkshire and Cumbria.

“He absolutely loved MediPro and they provided the pall bearers and an ambulance escort for the cortege at his funeral,” said Barbara, of Darlington.

“MediPro provided cover during the filming of Vera and he loved having his picture taken with actor Brenda Blethyn. One of his highlights was being given the chance to drive her Land Rover.”

A spokesman for MediPro said: “Chris really was a valued member of the team which supports the NHS across the region. He is being greatly missed.”

Barbara added: “He will always be baby brother to me and my sisters Brenda and Gillian. He was always full of fun with a smile on his face and loved by so many.”