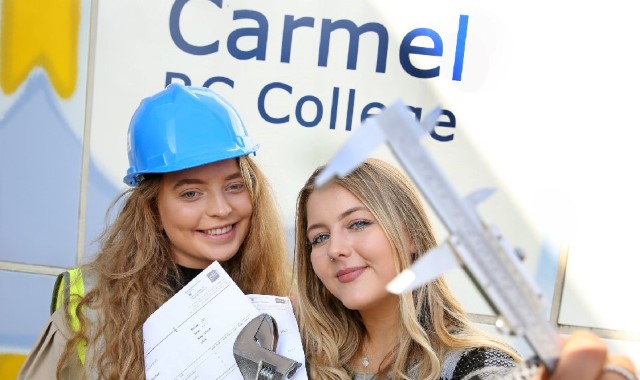 STUDENTS are preparing for the next chapter of their lives in the company of the world’s best brains after securing exceptional results at a North-East college.

Innovative design company Dyson, global engineering firm Jacobs and the universities of Oxford and Cambridge are just some of the top destinations students from Carmel College, Darlington, are heading.

Almost 80 per cent of the college’s mathematicians obtained A*-B results with more than 60 per cent of A level results at either A* or A grade, in an outstanding display of academic prowess.

Joseph Sebastine is promised a whirlwind career after being offered a degree level apprenticeship with Dyson.

The 18-year-old, of Darlington, will study an engineering degree at Warwick University while serving his four year apprenticeship with Dyson, at Malmesbury, Wiltshire.

After a rigours selection procedures including aptitude tests, dissecting a Dyson hairdryer  and being grilled by engineers, he secured one of just 44 apprenticeships nationally from 850 applicants.

“They asked me who had inspired me to want to be an engineer,” he said. “I suppose saying James Dyson would have been a good answer but I said my parents who are both engineers. I am really excited to be working with Dyson and can’t wait to start on September 1.”

Four A*s were more than enough for one of the country’s best mathematicians Laura Bradby to secure a place at Trinity College, Oxford University.

The 18-year-old, of Brompton-on-Swale, near Richmond, has had a passion for maths all her life and has taken part in the prestigious British Mathematics Olympiad on several occasions, while also being selected for summer camps by the UK Maths Trust.

“I’m thrilled with my grades and so excited about going to Oxford,” she said. “As soon as I visited the city and the university it felt like home.

“I came to Carmel College for sixth form and it was the best decision ever. The maths department is incredible and I am so grateful for the help and support I received when applying to Oxford.”

Classmates Rebecca Roberts and Katie Rotherham have both opted for degree level apprenticeships with leading engineering company Jacobs, which designs large scale structures such as power stations and bridges around the globe.

Student Johnathan Hopkins is heading to Cambridge after gaining three A*s and a B, while Max Kaufmann’s three A*s will also see him study at the prestigious university.

Emma Patrick, who gained A*s in art, maths and physics, hopes to use her talents to design a visual aid to learning for physics.

Josh Glendenning, who gained A*s in music, computer science and English literature, and wrote the last school play, hopes to pursue a career in writing and story-telling.

Principal Mike Shorten said: “The results are yet again a fine tribute to the hard work and dedication of the students. We have always had outstanding results but these are the best results in recent years.

“It is great that the students and staff are able to celebrate not just the fantastic grades but also that they are going onto their first choice destinations. We have students heading off to Oxford and Cambridge and others to apprenticeships with internationally renowned firms such as Jacobs and Dyson; they really have world class futures ahead of them.”