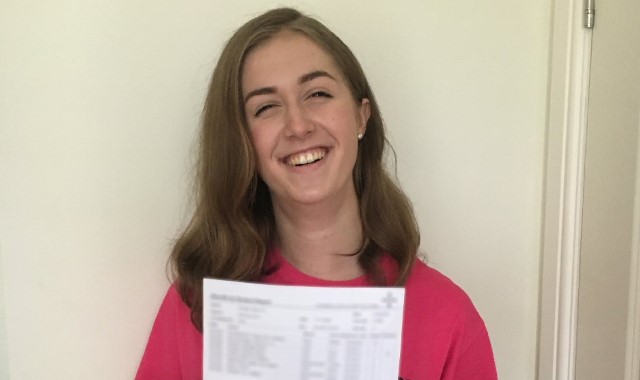 A PUPIL who defied the odds was celebrating her GCSE exam results along with delighted fellow students, staff and parents at a North Yorkshire school.

Naomi Savage picked up her results from Northallerton School & Sixth Form College, after surviving the most common cancer killer of children.

When she was four-years-old, she developed a malignant brain tumour, which statistically has a very poor prognosis, and required extensive treatment to remove it and prevent a recurrence.

There wasn’t a lot of information available when Naomi was ill, so her mum, Lucy, set up a charity, called Naomi’s Fight For Life Fund, to raise awareness.

The charity is now part of Brain Tumour Research, and 16-year-old Naomi now acts as an unofficial ambassador to provide inspiration for others with the illness.

“The fact that I got through it and was able to take my GCSEs as a mainstream student can give hope to people facing the same challenges that I did,” she says. “It gives me the opportunity to raise awareness of the issues surrounding brain cancer.”

Although she has some ongoing physical symptoms, Naomi was delighted to continue her schooling and achieve good results in all eight of her GCSEs.

“I was most surprised by my maths result, as that’s not my best subject and I’ve had to have extra intervention over the years,” she said.

Although she still has annual check-ups, the future looks bright for Naomi, whose plans include going on to study for A Levels.

Interim Principal, Vicky Rahn, said: “The school is extremely proud of all our Year 11 cohort who have done exceptionally well in the exams, and which reflects the hard work of the both the students and the teachers.

“It has been a good year for GCSE outcomes, with a notable number of students taking the exams and achieving passes in key subjects like Maths and English.

“We are delighted to have seen increases in both our basics measure and the significant number of students achieving the highest Grade 9, which is indicative of our effective student-teacher partnership.”

While many of the students plan to continue on to sixth form, two pupils are very clear in what direction they’ll take.

James Thompson, who passed all ten of his GCSEs, is heading for a career with the Forces, after he’s completed his A Levels at Welbeck Defence Sixth Form College. He plans to go on to university to do Mechanical Engineering, before joining Sandhurst.

Jack Hind also achieved ten good passes, and hopes that good A Level results will help him to join the EDF Energy apprenticeship scheme to study for a degree in Nuclear Engineering.