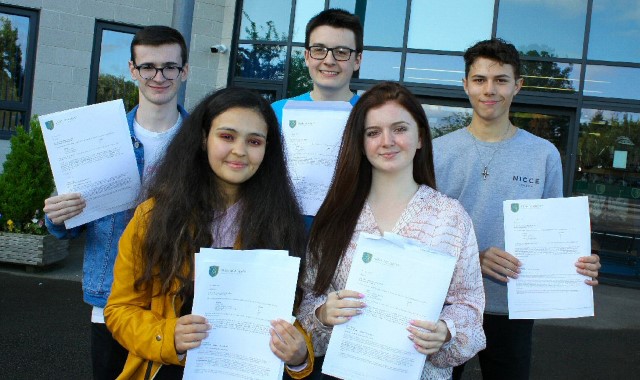 MUSICIANS, singers and actors celebrated first class performances with fellow students and staff at a Northumberland Academy as this year’s A Level results were revealed.

Many students at Bede Academy, in Blyth, reaped the rewards of their hard work with 99 per cent of results a pass or above.

Gifted pianist Jack Beall, 18, who was recently presented with The Founding Principal’s Award for Outstanding Character at the academy’s annual Presentation Day, achieved two As in chemistry and physics and a B in maths.

“Music is my hobby but I’ve always enjoyed science,” said Jack, who will be studying chemistry at Warwick University.

“I regularly helped the music and audio visual departments with school productions and concerts, as well as playing piano in assembly, but I’ve always wanted to have a career in science.

“My subjects were very difficult and I’m really happy with my results thanks to a lot of hard work and help from the teachers here at Bede. If you put the work in, you can definitely get to where you want to be.”

Jack was among five students at Bede Academy who all secured A grades including Jack Williamson, Jasmin Laidler, Anna Leason and head boy Jacob Glendenning.

Jack said: “I feel that I am more confident, especially after being house captain and speaking in assemblies. I am now comfortable speaking to large crowds, and also in group situations. I can be happy with what I have achieved. I’m excited to go and study something I’ve never explored before in biomedical science.”

Anna, 18, of Blyth, who achieved two As in English literature and religious studies and a B in geography said: “I am just in shock. I’ve never had such good results in my life.  I was so sure that I wasn’t going to do well that I hadn’t even made any plans to go to university.

“I thought I’d just get a job and then apply for a foundation course next year. This changes everything and hopefully now I can go to Newcastle University to study geography.”

Jacob said: “More than anything, Bede Academy has given me confidence.”

Budding actor and singer Adam Swalwell, 18, who starred in the academy’s productions of Phantom of the Opera and Les Miserables and organised a fundraising concert for a visit to Bede’s link school in Nokuphlia, in Africa, is set to expand his creative talents after being accepted to study media and performance at the University of Salford.

Adam who passed three A levels in music, English language and religious studies, said: “Bede Academy has given me a great foundation in music and drama. I really want to work in the media as well as pursue my acting and singing so the course at Salford, which is so close to Media City, will be amazing.

“It will be sad to leave Bede. I have been here since the primary academy first opened in 2009, but it’s also good to turn over a new page and move on.”

There were successes in geography, with the department celebrating its highest ever number of A and B grades, and BTEC sport diploma students continuing to demonstrate their prowess with 94 per cent of the cohort achieving a double distinction or above.

Principal Andrew Thelwell added: ‘We are proud of the achievements of our students at Bede Academy. Their results reflect the hard work and dedication that they have put in, as well as the support that they have received from their families and our staff.

“A number of students are ready to embark upon university courses next month having chosen diverse areas of study including nursing, STEM, English and law. Many of our students will be going to some of the country’s most prestigious universities such as Durham, Newcastle, York and Warwick.

“I am confident that they will all go on to be successful whether at university, in apprenticeships or in work and wish them all the best for their futures.”

The majority of Bede students achieved their first choice university, and we have had an increase in the proportion of students going to prestigious Russell Group universities. Four students are embarking on Primary Education courses and many more have secured good quality apprenticeships and employment.

Student Robyn Stobbart added: “Bede feels like my home. I’ve been inspired here to become an English teacher and will study English at Northumbria University. I want to give back to the community and enable students to fulfil their potential.”

Her mum added: “We’re so lucky to have this school in Blyth.”