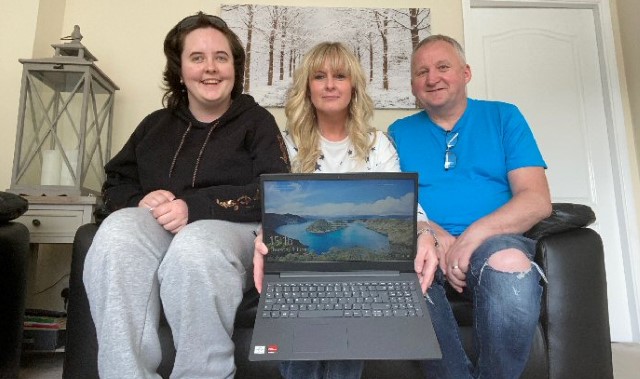 COUNTLESS carers have been thrown a virtual lifeline as a charity taps into the benefits of technology. For carers Julie and Keith Purvis being given a laptop and training by Durham County Carers Support’s Connecting Carers project provided a window on the outside world as they cared for their daughter Jade, 23, in increasing isolation caused by the pandemic. “Our day to day life is so difficult, looking after Jade 24/7 who has potentially fatal epileptic seizures, asthma and autism,” said Julie, of Chester-le-Street. “Trying to go through her medications and care plan with a team of social workers on Teams on my iPhone was exhausting and frustrating. It was difficult to read and type, the phone would operate slower and slower and run out of charge. So having a laptop was absolutely massive to us, ground-breaking. “We were isolated before COVID but afterwards this was even worse. Just having a laptop and knowing we can jump on it anytime to order prescriptions and food or do our banking means that we will be all right. “Having the laptop has also given me new life-skills and the ability to make contact with people in similar positions to us so we don’t feel so alone.” Durham County Carers Support has had to deal with thousands of extra calls for help as COVID threw a spotlight on the plight of unofficial carers looking after their families. “More and more people began to appreciate that they had a caring role because of the pandemic and it proved to be a massive catalyst in this realisation,” said DCCS chief executive Jenni Wood. This year’s National Carers Week (June 7-13) has the theme ‘make caring visible and valued’ and will see Durham County Hall, Darlington Town Hall and Spennymoor Town Hall as well as other regional landmarks such as the lighthouse in Sunderland, illuminated in blue light as a mark of support. “More people than ever who have been working from home are now wondering how they will manage now they are starting to go back into work,” said Jenni. She said DCCS had responded to the COVID crisis with a variety of initiatives including helping people to feel more at home online, supporting them with both equipment and training. “As well as helping them with Zoom and Teams, we also had sessions on spotting scams and staying safe on line,” said Jenni. “This helped them access everything from benefits, prescriptions and shopping to support meetings and counselling, infection control courses, yoga or pilates. Once people get over their fear of technology they can join all sorts of online activities.” The charity, which supports over 23,000 informal carers across the County Durham and Darlington, is also urging people to join its 50/50 Club, a monthly draw which finances its counselling services. For a £1 a month entrants are issued a number which goes into a draw 12 times a year with the chance of winning one of three prizes. DCCS finance manager Jacqui Coulson said: “If as many people as possible could buy a number that would be amazing. It’s a great way for us to generate proceeds for our counselling services which have never been in greater demand because of the pandemic.” DCCS can be contacted on 0300 005 1213 or visit www.dccarers.org.