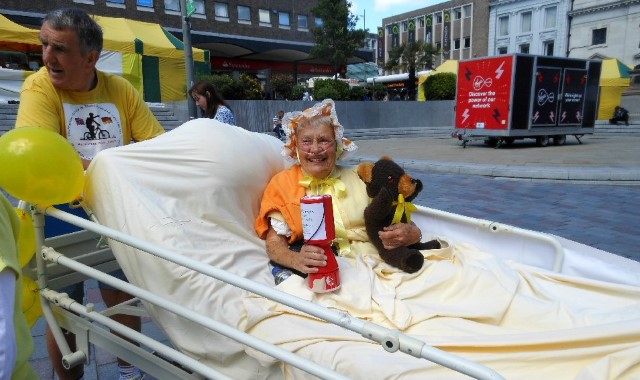 A DIGNIFIED and humble charity worker who sparked a movement in palliative care has been nursed to a peaceful end by the hospice she helped found.

Staff at St Teresa’s Hospice, Darlington, yesterday said they’d had the privilege of caring for Yvonne Rowe in her final moments, their fitting tribute to the ‘amazing example of people power’ whose letter to the editor prompted a revolution in end of life care.

In 1985 Yvonne nursed her best friend Mary Hester through the rigours of cancer where she first heard about the hospice movement, a service which cares for people with life-limiting illnesses, keeping them happy and free from pain.

She wrote to The Northern Echo, Darlington and Stockton Times and Evening Despatch saying: “When chatting to a group of friends, we all thought how marvellous it would be to have a hospice in Darlington.”

The letter led to a public meeting, a campaign and the formation of the Darlington & District Hospice Movement charity, which at first provided home care via a team of volunteers.

Later a donation by the town’s Carmelite Convent nuns resulted in the Hospice’s first building, attracting a message of support from Mother Teresa of Calcutta.

Now well-known as St Teresa’s, today the hospice offers the people of Darlington, South Durham and North Yorkshire day, in-patient and community services and leads the country in the care of patients, its Rapid Response Team having recently become one of the first to be included as a 999/111 emergency service, which Yvonne herself was able to use.

St Teresa’s Hospice chief executive Jane Bradshaw said: “Yvonne was so humble, so unassuming, yet with that one letter to the editor sparked something which has helped thousands of patients and their families for more than three decades.

“She is such an amazing example of people power and even in her final days had the strength and will to help promote the hospice in a television interview.

“She was so practical; she would fund raise through arts and crafts and introduced me to so many people as she promoted St Teresa’s.

“She was knitting toys in her last week and I have a collection of the Santas which she completed every Christmas – including many in different colours, one in Lurex, and another like Dennis the Menace. Only a couple of weeks ago, Yvonne gave me the one she had knitted for this year, a Santa holding up a newspaper with ‘World Cup 2018’ on it.”

Yvonne was given the Hospice’s highest honour in 2000 by being made an honorary life member. Her name will become a permanent feature of the hospice’s new memory tree, which honours patients with a dedicated leaf on a beautiful wall sculpture.

Jane said: “Yvonne really loved that tree as she thought it was such a respectful way to commemorate people. Our thoughts are with her husband Alan who has supported her in all of her ventures. Anything we asked of Yvonne, Alan was always there too.”

Hospice chairman Harry Byrne said: “Yvonne was the catalyst for the development of the hospice movement in Darlington, South Durham and North Yorkshire. Despite that she remained one of the most modest and dignified people you would ever hope to meet.”

Head of care at St Teresa’s Hospice Alison Marshall said: “Yvonne was always full of praise for the care she received and thanked us for everything we did, even though we were only there because of what she had done. She was always there for the hospice and when her health was affected it was a privilege to be there for her.”

Hospice president Alasdair MacConachie added: “A modest and in so many ways ordinary person Yvonne achieved extraordinary things. Her enthusiasm and relentless support leaves this area with a lasting legacy in the form of one of the best hospices in the country, with an incredible staff who help countless patients and their families at their most vulnerable times. We owe Yvonne such a lot and it is so nice that we were able to look after her in a final gesture of thanks for the amazing things she did for us.”