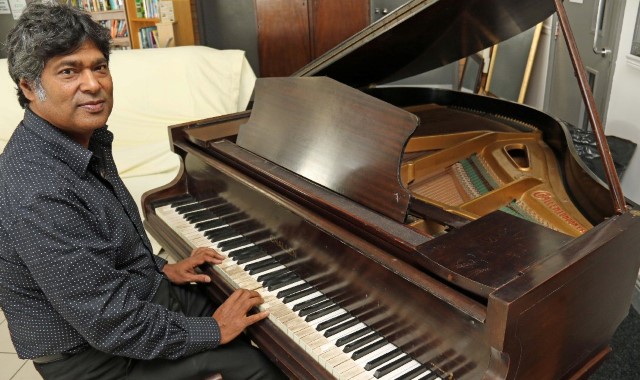 A CHARITY superstore proved to be the key to successful shopping when a local businessman discovered the perfect buy in a baby grand piano.

Restaurateur Mohammed Miah had been scouring the country for a baby grand which will take pride of place in the lobby of his new hotel currently being built in India.

The proprietor of Akbar The Great Indian Restaurant, in Bondgate, Darlington, snapped up the bargain which had been donated to the St Teresa’s Hospice superstore in the town.

Built originally by Challen for Selfridges, London, piano makers since 1804, the baby grand still carries the ‘By Royal Appointment’ mark but is in need of a full refurbishment.

Eventually it will be painted white and be played in the lobby by a professional pianist in his new five star hotel which is under construction in Bangalore.

He said: “I am looking for another three and was delighted to find this one in St T’s Superstore. I had been looking all over and ended up finding this one on my doorstep.

“The St T’s Superstore is brilliant. The staff are so friendly and helpful and the proceeds go to continue the work of the hospice which is such a great cause. I like to do as much as I can for charity. We are only here once so we have to help each other.”

St T’s retail manager Marjorie McIntyre said: “Mohammed is a great supporter of the hospice and we were thrilled that he was so pleased with his purchase.

“The baby grand is a lovely piece of furniture and we were delighted to receive it, but it needs a lot of work before it can be played as an instrument. It is such a lovely thought that it will bring pleasure to people for many years to come in the new hotel in Bangalore.”