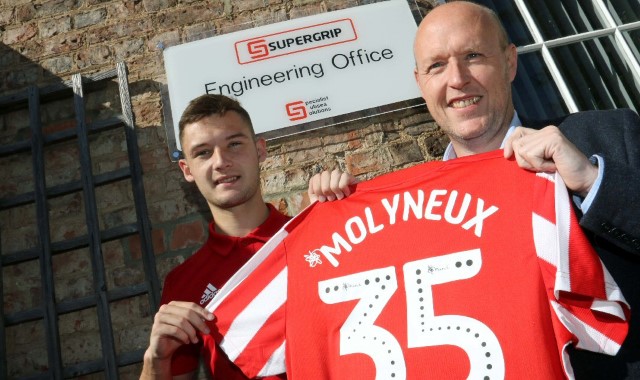 A TALENTED footballer has been sponsored by a subsea engineering company in a link-up bringing together family and friends and their life-long passion for Sunderland FC.

SAFC Academy winger Luke Molyneux, who has debuted for the first team, is being sponsored by Supergrip (UK) Limited, which specialises in supplying bespoke equipment for the subsea industry.

Director Gordon Conlon has been a passionate supporter of Sunderland since he was a child along with his oldest friend Philip Molyneux, Luke’s uncle.

During a recent celebration of Phil’s 50th birthday the conversation drifted to football and Gordon agreed to sponsor Luke’s kit.

Gordon said: “Luke is an attacking, pacey winger and was scouted by Sunderland at the age of 13. He has progressed through the ranks and made his debut for the first team at the end of last season starring in the 3-0 win over Wolverhampton.

“It was great to see Luke on TV recently playing on loan to Gateshead with a 1-0 win over Ebsfleet United.

“With the relationship between Phil and myself, and also knowing Luke’s mam Jane and grandparents Peter and Anne, I jumped at the chance to sponsor him.

“We are all very proud of his achievements so far and none more so than his grandad Peter and his Uncle Philip, who are both life long supporters of Sunderland AFC.”

Luke said: “I debuted for Sunderland’s first team last year when the winger pulled his calf warming up. It was such a proud moment for me and the family.

“I am on loan to Gateshead until January to develop my game and the dream is to help Sunderland get back in the Premiership.”

Supergrip specialises in supplying bespoke equipment for the protection of subsea umbilicals, flexible risers and steel pipelines during installation and operation. The company has recently moved from Newton Aycliffe to larger premises in Coniscliffe Road, Darlington.

Gordon runs the firm with co-director Darren Blackburn with engineering offices in the North East and production facility located in Colne, Lancashire.

“As a company we try and support local people and good causes when and where we can,” said Gordon. “As part of the SAFC sponsorship package, we received a hospitality day at the Stadium of Light, which was attended by members of both Phil’s and my family and was made all the nicer as it coincided with my dad Matt’s 89th birthday.

“I also received a signed shirt from Luke which will take pride of place in our boardroom. Everyone at Supergrip wish Luke well for the remainder of the season and we will be following his career with great interest.”