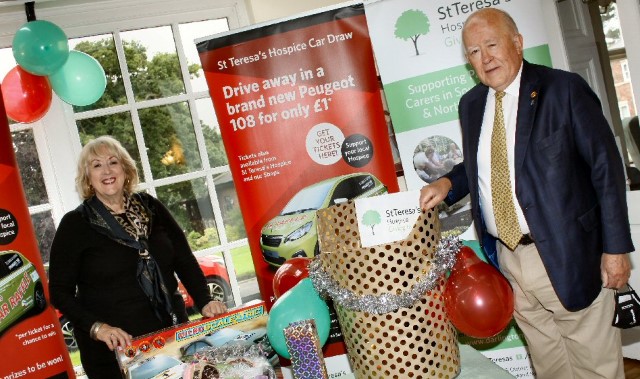 ONE lucky ticket holder is set to drive off in a brand new car after scooping first prize in a virtual charity draw.

The top prize of a Peugeot 108, provided with support from long-time supporter of St Teresa’s Hospice Sherwoods Motor Group, was won by ticket number 3994.

Profits from the draw, which raised over £15,000, will help to provide vital funds for the hospice on Woodland Road, Darlington, which provides free day, in-patient and community care, as well as counselling and bereavement support, for people living with life limiting illnesses and their families in Darlington, South Durham and North Yorkshire.

St Teresa’s chief executive Jane Bradshaw said: “Due to Covid-19 we were not able to hold the car draw as we would usually, in a public place with lots of people around, but we hope that lots of our supporters were able to join us virtually online.

“This has been a very challenging year for the hospice, like most charities most of our fundraising activities have been cancelled and it would have been so much worse without the fantastic support from our community.

“The original draw date was postponed due to Covid, but thanks to online ticket sales we were able to keep it going through lockdown and it’s wonderful that so many people have continued to support us with one fundraiser even buying £1,000 worth of tickets for the draw in recognition of care received for a relative at St Teresa’s.”

The draw, now in its fifth year, has raised over £80,000 in total for the Darlington hospice.

“Sherwoods was one of the original companies to support St Teresa’s Hospice and we are delighted to be able to continue that support during these difficult times.

“The Peugeot 108 is a magnificent prize and the winning ticket holder will not only get to choose what colour car they would like they will also be invited to our dealership, in Belmont, Durham, so that I can personally present them with the keys.”

A further nine prizes, including an Iron Man karting session at Teesside Karting for up to ten people and annual membership at Catterick Racecourse for two people, were also drawn with all winning details available on the hospice Facebook page: www.facebook.com/stteresashospice.