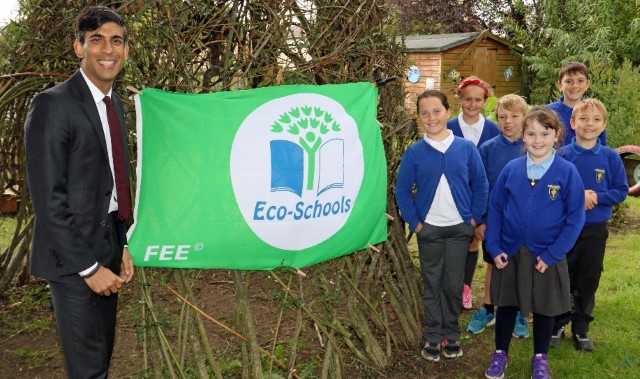 PRIMARY children softened up the Chancellor of the Exchequer with marshmallows before unleashing a barrage of hard-hitting questions.

The country’s chief financial minister Rishi Sunak, who is also MP for Richmond, accepted an invitation from Pickhill Church of England Primary School, near Thirsk, to hear about its ecological work.

Earlier this year the school was awarded the prestigious Green Flag accolade for its relentless work to care for the environment, becoming one of the few schools in the county to receive the honour.

Mr Sunak was taken on a tour of the school grounds by teaching assistant Philippa Moss and the school’s eco team and shown the diverse range of eco-projects completed to gain the national accolade, before toasting marshmallows over an open fire to make smores.

He then hosted a school question time where he was grilled on anything from the name of Boris Johnson’s dog and what he does for the environment to how he was going to pay for the cost of COVID-19.

Mr Sunak told pupils: “Being made Chancellor was a big surprise – I really wasn’t expecting it – and it is a real privilege.

“This has been a very difficult time and I have had to make a lot of decisions that affect the whole country, which has been stressful. My biggest fear is getting it wrong.”

He said his job was to find how to raise almost a trillion pounds a year and then decide how best to spend it, on schools, the NHS and social welfare, foreign aid, the environment and the armed forces. “People ask me for money and I have to decide whether they can have it – it’s so important to get the balance right,” he said.

He said, on the environment, Boris loved cycling and was creating more lanes to keep people out of their cars. The Government was also trying to ensure the country had the right technology in place to cut the reliance on fossil fuels and had created a fund to plant millions of trees to absorb carbon.

“We don’t have as much money as we would like at the moment and can’t keeping borrowing,” he said. “So we have to find ways to help us borrow less while still making sure we have enough money to do the things we want to do.”

On COVID-19, he said a  lot of scientists were working hard to find a vaccine, which could put a quick end to the pandemic, otherwise the disease could be around for a long time and society would have to learn to live with it. The best way to stay safe was to wash your hands regularly.

Of Boris Johnson he  told pupils: “I see him every day and he is my friend as well as my boss. He is great; a lot of fun. I live next door at No 11 Downing Street and my two daughters play with his dog Dillon.”

Head teacher Rowena Sykes said: “Mr Sunak must be incredibly busy and we really appreciate him taking time out to visit our school.

“I was so proud of the children’s questioning, in fact I thought their questions were better than the ones you hear on the news. It’s not every day that the children get to take a selfie with the Chancellor of the Exchequer and I think the whole experience is one they will remember for the rest of their lives.”