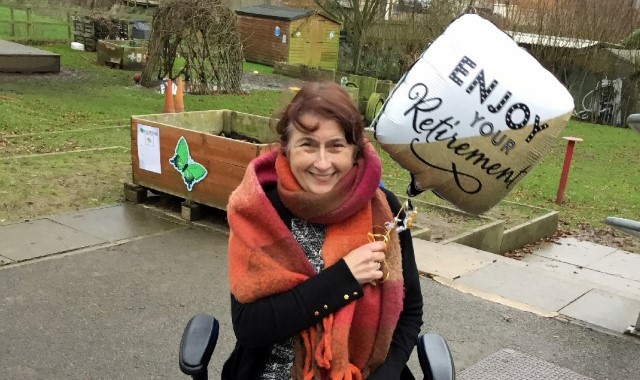 A HEAD teacher was faced a with a double celebration when she retired from leading not just one school but two.

For the past three years Rowena Sykes has been executive head teacher of both Leeming and Londonderry Primary School, between Bedale and Northallerton and Pickhill Primary School seven miles away near Thirsk.

She oversaw the federation of both primary schools and also acted as executive head supporting Middleham Primary School for 12 months.

Originally from Haltwhsitle in Northumberalnd and educated in Hexham, she studied at Bath University before becoming a teacher.

Previously she worked at several schools in the London Borough of Barking and Dagenham and Tottenham and at Tilery Primary School in Stockton from 1990 until 2003.

Mrs Sykes started at Leeming and Londonderry Primary School in 2003. She took over as executive head at Pickhill in September 2017 before leading the federation of Leeming and Pickhill from October 2018. One of her final tasks recently was to play host to the Chancellor of the Exchequer Rishi Sunak on a visit to Pickhill Primary School.

In a question and answer session with pupils, Mrs Sykes told children: “I always wanted to be a teacher from being a child when I used to play schools. Working in London was quite scary as was becoming a head teacher for the first time and realising what a big responsibility that was.

“But my 17 years as head have been full of highlights; the trips away, working with lovely people and teaching great children. When you see a child do something that they could not do before, that’s a real wow moment.”

She said she was looking forward to her retirement which she would spend seeing her family, walking and meeting friends for coffee.

Chair of governors Anna Smith said: “Rowena has always been a fierce advocate of rural schools and providing children with a rich curriculum that not only enables them to achieve academically but provides countless opportunities to grow into well rounded, confident, independent global citizens.

“She has served both schools and the communities with loyal dedication and will be greatly missed. We wish her every happiness in her retirement.”