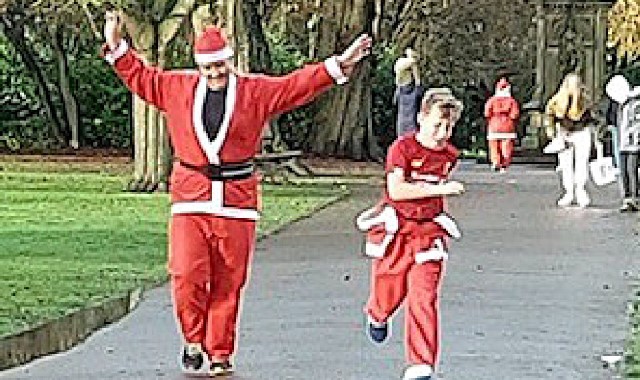 FESTIVE fundraising is reaching a peak as runners cross the line in a series of charity Santa dashes.

Mother and son Sasha and Oscar Warr completed their Santa run and raised a total of £1,772.15 into the bargain.

The jogging duo headed to South Park and ran in memory of Sasha’s uncle Peter Wills, a volunteer at St T’s High Row shop who died recently after a short illness.

Sasha, who runs her own consultancy Outsourced HR but is also a hospice trustee, said: “Oscar and I were overwhelmed to receive so much support; it’s testament to the good work the hospice does in the local area. We are already planning next year’s fundraiser.”

A team of six from Darlington Hippodrome also took part in the Virtual Darlington Santa Run and have so far raised £1,290. Runners were keen to get involved to support the hospice because the traditional pantomime bucket collections will not be happening this year.

Julian said: “Over the years we have raised thousands of pounds when panto comes to town and we did not want St Teresa’s to miss out this year. So we put on our Santa suits and set up a Just Giving page (https://www.justgiving.com/fundraising/darlington-hippodrome-santarun). We only set ourselves a £250 target and are delighted to have raised so much.”

The hospice needs to raise £3m a year to provide free in-patient and community care for people living with life-limiting illnesses and their families in Darlington, South Durham and North Yorkshire.

An emergency appeal launched in March raised more than £100,000 in a matter of weeks. Donations can still be made at www.justgiving.com/campaign/hugtostts.

Chief executive of St Teresa’s Hospice Jane Bradshaw said: “So many people have continued to support St Teresa’s during the pandemic in ingenious and fun ways. It really does warm your heart to see that they recognise the plight we are facing and are prepared to think of ways they can help while still keeping safe from COVID.

“The virtual Santa Run has been a great way to give people something back while raising even more funds to ensure we can continue our work during this difficult period when our traditional activities have been decimated.”