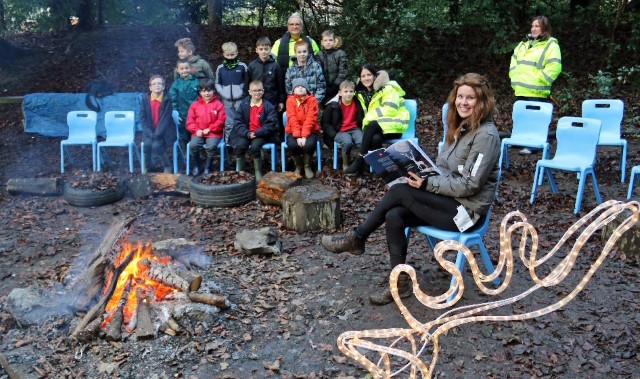 A MAGICAL story of a rare white stag, based on real-life events, is inspiring pupils to focus on conservation over commercialism this Christmas.

Author Sarah Fae, a former teacher at Beaumont Hill Academy, Darlington, returned to inspire its pupils and children at its sister school Marchbank Free School with her new book Ghost the Christmas Stag.

Pupils were treated to an inaugural story-telling around a roaring camp fire in a magical grotto created in the forest school at Marchbank.

Written by Sarah, illustrated by Kathryn Holeman and published SilverWood Books, the lyrical fairytale is told through the eyes of a young boy, ‘Hector the Forest Protector’.

Like many children, Hector’s biggest fear is landing on the naughty list but that all changes after finding a rare and elusive creature in the woods. As news of a shock retirement reaches Lapland, can a Christmas crisis be averted by a little boy with a big concern for the natural world.

Sarah’s book sold 999 copies on pre-release and the publisher has already asked for support from another printer to meet the demand.

She told the children the book was based on real events as she stumbled upon a rare wild white roebuck in Northumberland in 2019. Since the 1940s only six have been sighted throughout the British Isles.

She said: “The White Hart is steeped in spiritual significance, a rare and elusive creature whose appearance foretells of great change. His very existence in the wild enables us to understand a miraculous ancient truth, nature can and will survive, even if it seems against all odds.

“After seeing the stag the tale seem to form perfectly in my head in rhyme. I picked up a pen and four hours later it was there, like I was just a vessel for the story.”

With a background in radio journalism, Sarah taught at Beaumont Hill, which is part of the Education Village, for three years until her practice of Forest Yoga became a career, also leaving her time to write for a magazine.

“Ghost is a real symbol of hope, his existence and survival in the wild is nothing short of miraculous. I feel his appearance is a timely reminder that we should protect and respect that which is sacred in all beings and creatures,” she said.

Marchbank’s head of school Tess Wright said: “Our children have been amazing right through the pandemic and we have never closed. They have worked so well in their bubbles and we wanted to make the run up to Christmas as special as we possibly could.”

Beaumont Hill principal Adrian Lynch added: “We have all been delighted to see Sarah again and are thrilled her lovely book is doing so well – it certainly inspired the children in their creative writing.”

The festive dell for the reading was created by site manager John Craggs who said: “The forest school proved to be the perfect setting for the event. It is an amazing facility and you can see the effect it has on the children as they enjoy being among the trees some of which date back to the 1800s. It will be better than ever soon as home builders Vistry, who have been constructing houses on the old DfE site next door, have promised to provide us with an outdoor classroom.”

Ghost the Christmas Stag is available to buy online with a portion of the proceeds donated to ReWilding Northern England.