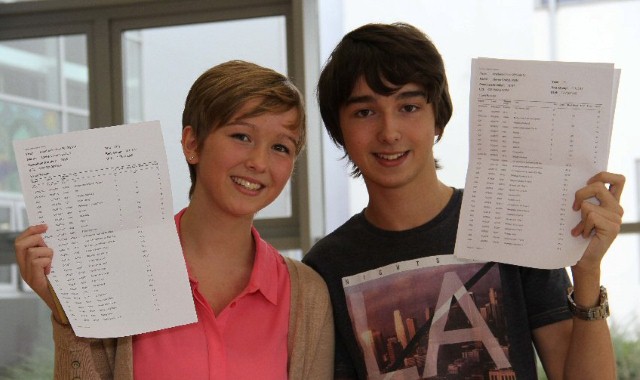 LANGUAGE proved to be no barrier for a Polish student who secured some top GSCEs yesterday despite being able to speak no English when he started school.

Piotr Toczyski, 16, of Haughton Academy achieved an A, two Bs and three Cs, a major feat given that he could only say ‘yes’ and ‘no’ when he joined the Darlington school in Year 7.

“In Poland we were not taught English and had to learn Russian and German,” said Piotr, who plans to study computer programming at Darlington College.

“When we moved to Darlington I could only say yes and no but with the help of my teachers and English TV and film I soon picked up the language. I am absolutely thrilled with my results which are better than I had hoped for.”

For twins Claire and Steven Dixon the results were virtually identical. The 16-year-olds, born two minutes apart, each secured two A*s and four As but Claire pulled ahead slightly with five Bs and a C compared to her brother’s four Bs and two Cs.

“We do get on really well and have helped each other with our studies,” said Claire. “But it was nice to pip him in the exams.”

Stephen replied: “I am still the older brother – by two minutes – but I am really pleased for Claire.”

Both siblings plan to study A Levels at QE6 in subjects ranging from psychology to French, with a common subject of maths.

Volleyball player Laura Hailes smashed her exams achieving eight As and three Cs. The 16-year-old is a middle hitter for Haughton volleyball team, which this year reached the national U16 finals ranking them in the top six in the country.

She said: “I am really pleased with my results and looking forward to going to college where I will play netball and continue my volleyball. I’d love to compete one day the Olympics.”

Haughton Academy principal Rachel Ireland said: “Results day is all about individual success, seeing all of our students achieve to the best of their ability and the Dixon twins, Piotr and Laura are incredible examples of what we strive to achieve.”