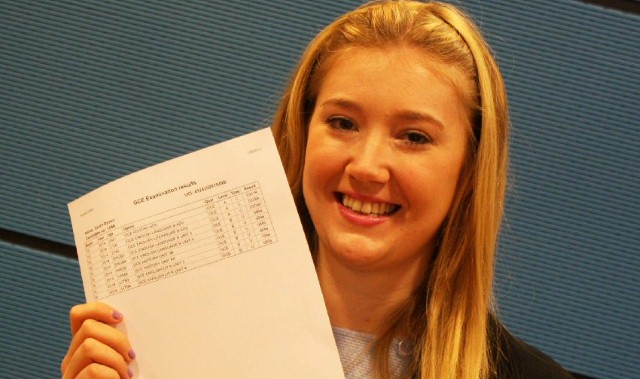 A TRIO of scientists lead the A level results at a Teesside academy this morning as it celebrates a marked improvement in performance.

Students at The King’s Academy, in Coulby Newham, have set a new record with 66 per cent of grades being at B or better, a jump of five per cent on last year.

Among the top performers are three boys who have excelled in gruelling subjects.

Joseph McCrae achieved an A* in chemistry, As in maths and further maths, and a B in physics and is hoping to study maths at either Durham or Leeds University;

Jeremy Hunt gained an A* in maths, an A chemistry and an B in physics and has a place to read chemistry at Durham University.

The top performing girl was Sarah Dyson with an A* in English literature, an A in English language and a B in history. Despite her strong results, Sarah had to push and persuade her first choice, Nottingham University, to accept her after initially being declined.  Sarah, who will read history, said: “I was determined to get in. I wouldn’t take no for an answer and contacted them via email until I got in.”

Abbie, who will study fashion communications promotion at Huddersfield, said: “It’s incredible, really good. Textiles are my life. All the hard work, staying back after school and putting in so many hours at home, has really paid off.”

Principal Chris Drew said: “For two thirds of our students’ grades to be B or better is excellent for any school so we are delighted.

“We are also celebrating some exceptional individual performances with students who have worked incredibly hard and thoroughly deserve their success.”