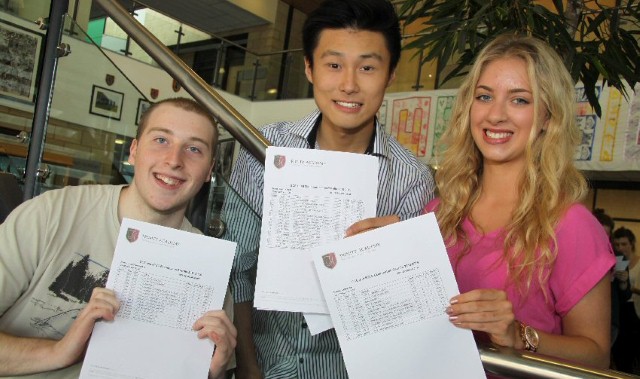 HARD work and strong exam performance have added up to A level success for students at a South Yorkshire academy as it prepares to unveil its new £1.2m sixth form centre.

The top performers at Trinity Academy, in Thorne, have all excelled in maths and sciences, with three heading to university to study chemistry.

The new dedicated sixth form extension to the academy, which incorporates two new computer room facilities, seven additional classrooms and study, social and refreshment areas for 400 students, will be handed over next week in time for the academy reopening in September.

Among the success stories this year are:

Danny West joined the academy in Year 8 from Beijing with very little English. After achieving an A* and eight As in his GCSEs two years ago, he has progressed even further to achieve an A* in maths, As in further maths and chemistry and a B in Mandarin. He is going on to study chemistry with mathematics at prestigious University College, London.
Danny, 18, of Hatfield, said: “I was really nervous waiting for my results and I am so relieved to have done so well – I can’t thank the teachers here at Trinity enough.”

Laura Day has rounded off 12 months in which she was named Trinity's Outstanding Student of the Year, with A*s in economics and maths as well as an A in chemistry and an A in AS geography. Laura will read chemistry at the University of Bristol.
Laura, 18, of Thorne, said: “I needed an A* and two As to get into my chosen course at uni but I was worried that I’d only got 3 As. To get 2 A*s and an A is incredible - it has been a lot of hard work but it has really paid off.”

Jonathan Thirkle worked incredibly hard in the face of adversity to gain As in chemistry and physics and an A* in maths and will study chemical engineering at Sheffield University.
Jonathan, 18, of Edenthorne, who battled against autism to complete his exams, said: “Having autism means that I can be easily distracted from my work, making it harder to study for exams. The teachers here at Trinity really helped me focus and gave me lots of past papers to work through and I’m pretty chuffed with my results.”

The overall results saw the percentage of A*-B grades hit 37 per cent and A*-C reaching 66 per cent, both showing an increase of six per cent on last year.

Acting Principal David Page said: “We are delighted at how staff and students have responded in what has been a challenging year but one in which support for students has not wavered.

"We have all worked extremely hard to drive up standards within the Academy and, whilst there is still work to be done, we are already showing signs of improvement. These grades help to confirm that.

"We are confident that with the dedicated staff we have and our new state of the art facilities we will continue this improvement journey into next year and beyond.”

Other notable successes are:

Emma Huby: A* in Psychology, As in Business and Media Studies and an A in AS Applied Business.

Beth Chapman: an A Health and Social Care and double A* in Business Studies.

Montana Speight: three A grades in Health and Social Care after working hard to complete her studies in double quick time.