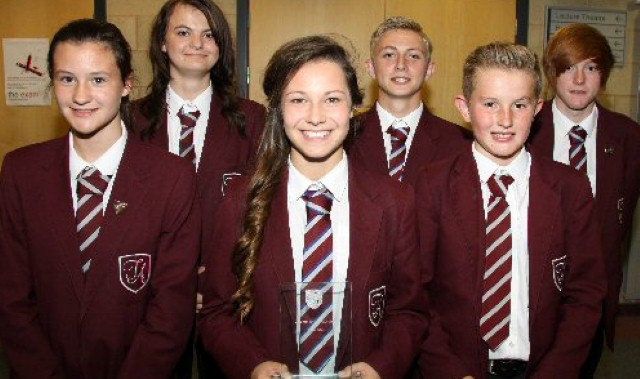 The CREAM of an academy's sporting talent have been recognised at an awards presentation.

Accolades were handed out in football, rugby, hockey, tennis, netball, athletics, rounders, cricket and alternative sports in which students at Trinity Academy, in Thorne, compete.

Parents and students were invited to the ceremony, held in the academy's lecture theatre, and served a buffet meal in the interval.

Head of PE Dave Potts said the event, which covered the 2012-13 season, was an opportunity to reflect on past achievements and inspire competitors for the current season, which has already got off to a winning start for the Year 10 and 11 football teams.

Mr Potts added: "Sport continues to be a massive strength of Trinity Academy and we are at the forefront of sport across Doncaster for what we offer here.

"Last season we had a huge turnout from students at practices for which we are grateful as it makes it all worthwhile. Our PE staff give a huge amount of time because of our fantastic students who want to train and challenge themselves in competitions, and we also thank their parents who give up their time to support what we're doing."

The evening also honoured a stalwart of school sport in Thorne, Barry Marks, with a new prize dedicated to the teacher who worked at Thorne Grammar School and Trinity Academy. Although he retired, he has continued to help the academy's PE department.

Mr Potts, who was himself taught by Mr Marks, said: "He is inspirational, so humble and more talented than many students will know. I can't speak highly enough of him which is why I've created this award in his honour."

The first Barry Marks Award for Sports Personality of the Year went to Jordan Linley, an athlete, cricketer, rugby player and footballer with Doncaster Rovers U16s.

"Like Barry he is inspirational. If Jordan is playing, other people want to play, he has that influence," said Mr Potts.

Ian Brew, principal at Trinity Academy, added: "We are blessed at Trinity to have fantastic facilities, a superb buildings management team, PE staff who teach high quality lessons that are both academic and physical and an excellent leader in Mr Potts. When Ofsted raise the bar, they rise to meet it.

"There isn't a school in Doncaster that can touch us in terms of the breadth and depth of what we offer. It's about coaching, training, good quality kit, transport, turning out for fixtures every time and all the things that go into well run school sport, and I congratulate everyone involved."