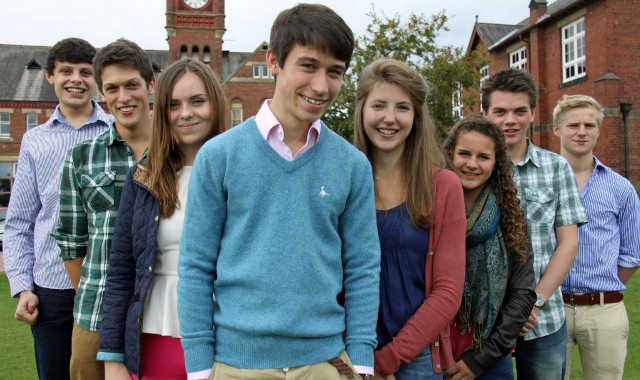 A group of high flying students are making final preparations before heading off to some of the country’s top universities following outstanding A level results.

The 18-year-olds from Ripon Grammar School contributed to its highest ever percentage, 79.4 per cent, of A*-B grades at A level, a performance which took it to the top of all the state schools in Yorkshire.

Leading from the front were former head boy and head girl, Hugh McHale-Maughan with six A*s and Georgina Sanderson, with an A* and four A grades.

They were among nine students to secure places at Oxford and Cambridge Universities.

Hugh, who will read philosophy, politics and economics at Brasenose College, Oxford, said: “It’s terribly exciting, but I will miss Ripon Grammar School. I think the collegiate system at Oxford will be helpful though in offering support and having Georgina at the college is great too.”

Hugh, from Ripon, who’s mum is an art teacher and dad manages physical training at the Army Foundation College in Harrogate, gained his A*s in Latin, maths, history, English literature, general studies and the EPQ qualification for a study of the impact of Margaret Thatcher’s premiership.

Hugh and Georgina, from Ripon, who will read medicine, will be joined at Oxford by Benjamin Nabarro, who achieved three A*s and an A and will also read philosophy, politics and economics.

Closely behind Hugh were Cameron McCormack and Sian Avery, who each achieved five A*s.

Cameron, from Ripon, is heading to Cambridge University to read chemical engineering.

The other top achievers are going north and south – Alex Worrall, of Burton Leonard, will read maths and Will Johnson, of Ripon, will study computer science at Durham University, while Hannah Hickingbotham and Elizabeth Tearle are heading to University College London (UCL).

Hannah, of Grewelthorpe, who gained three A*s and an A to read medicine, said:  “I’m excited and nervous at the same time because it’s quite daunting to leave your old life behind.“

Elizabeth, from Ripon, who will study archeology and anthropology, added: “I’ve been getting really scared over the last few days but I’m sure it will be fine when we get there.”

Headteacher Martin Pearman said: “This year’s A level students achieved outstanding results, indeed the best the school has ever seen. It was especially pleasing to see a 16 per cent increase in attainment from the AS results a year ago, which highlights the significant work put in by both students and staff in the upper sixth.

“Our former students are naturally excited and apprehensive about leaving for university, but they go with our very best wishes and we look forward to hearing about their continued success in the future.”