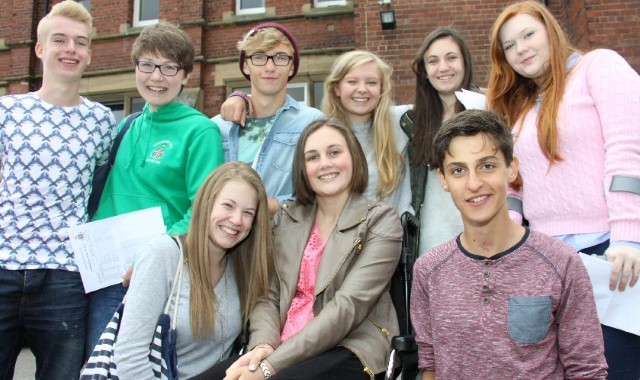 STUDENTS at Ripon Grammar School have recorded the school’s highest ever percentage of top grades at GCSE with a third of all results being at A*.

Among those returning to school to collect their results was Jenny Unwin, who, just weeks after completing her GCSE exams, was involved in an accident while cycling home from her job at a garden centre.

Jenny, 16, broke her back and is now in a wheelchair. Her dad drove her back to Ripon Grammar School from Pinderfields Hospital, in Wakefield, where she is undergoing three months of rehabilitation, because she was determined to collect her results with her friends and plan her sixth form studies.

Jenny, of Burton Leonard, near Ripon, achieved six A*s and five As and is looking forward to studying four A levels when she comes back after Christmas.

She said: "I tried to forget about the results over the summer, which was easy because I've had so much to do.

"I'm still uncertain at the moment about what to take at A level as things have changed because of my accident but I'm definitely coming back."

Headmaster Martin Pearman said: "We will do everything we can to support Jenny in her A levels and are very keen that she does as well as she possibly can. She achieved some extremely good results in her GCSEs, is a very determined character and has a lot of support from family and friends so I am sure she will go on to do very well."

The top performing students were Julia Atherley, with 12 A*s and one A, and
Donna Castle-Ward and Aimee Rutherford, who each achieved 12 A*s.

Julia's sister Faye, 19, was nominated by the family to accompany her in collecting her results. "I think I was more nervous than she was and I'm so proud of her. She did way better than I did," said Faye, who also went to Ripon Grammar School and is studying to be a teacher.

Julia, 16, of Ripon, said: "I started to doubt myself as the summer went on because it's been such a long wait between the last exams and today. I did 28 exams in total and just hoped I'd done well but I've been really nervous this week. I'm really pleased now though."

Julia plans to stay on at school to study English, history, maths and Latin A levels.

Twin sisters Aimee and Jessica Rutherford had a double celebration, achieving 23 A*s between them. The Ripon girls also gained an ‘A hat’ each, a grade that’s higher than a A*, in further maths.

Aimee, who sill study English literature, maths, chemistry and biology at A level with a view to reading medicine, said: "We did all the same subjects but we worked and revised independently, although we help each other when we can."

Jessica, who will take A levels in English literature, maths, religious studies and history, added: "We are completely different - I like reading and I hate sport whereas Aimee likes writing and hockey."

As a boarder at Ripon Grammar School, Dominic Edwards, of Ampleforth, had good practice for moving to Welbeck Defence Sixth Form College, near Loughborough, the first step on a career as an army officer.

Dominic, who collected his two A*s, three As, four Bs and a C grades on his 16th birthday, will spend two years at Welbeck before doing a university degree followed by 49 weeks officer training at Sandhurst, all funded by the army.

He said: "I start on September 2 and I'm really looking forward to it. I'll be in an engineering regiment and when you're rebuilding infrastructure and helping people recover from war and I think it's a very positive thing."

Another major success story was David Owens, who achieved six A*s, four As and two Bs. David is blind in one eye and, during his GCSE year, suffered a detached retina in his other eye. He had to go to London for specialist surgery and rehabilitation which included lying down for a fortnight.

Headmaster Martin Pearman said: “We all have every admiration for David. His determination to achieve these results is absolutely tremendous given what he has been through. We hope he is very proud because he thoroughly deserves this success.”