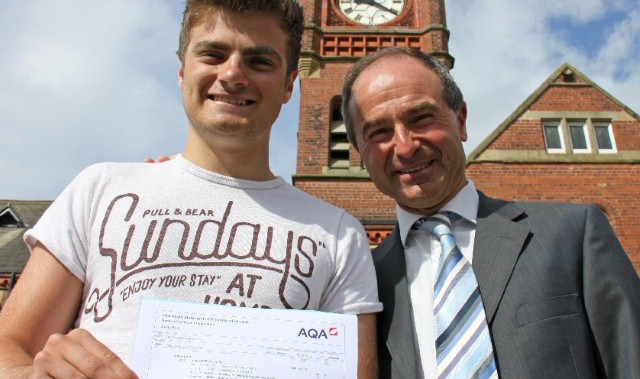 MORE than three quarters of all A level results at Ripon Grammar School were a B or better, with some exceptional individual performances.

The top performer was Twm Stone with five A*s in chemistry, maths, physics, further maths and the EPQ (extended project qualification), in which he explored the unsolved Riemann hypothesis. Twm, who joined the school as a sixth form boarder, is to read maths at Cambridge University.

The 18-year-old, of Oswaldkirk, near Helmsley, said: “Boarding at Ripon Grammar has been really successful for me. I thought I’d done OK but I didn’t expect to get five A*s. It’s been hard work but it’s definitely paid off.”

Top performing girl, Kate Bernard, of Whashton, near Richmond, is to read medicine at Sheffield University after achieving three A*s in French, chemistry and biology. The daughter of two psychiatrists, Kate wants to be a GP.
“I was very nervous. My knees were shaking as I read my results but I’m so happy with them,” said Kate, who also joined Ripon Grammar School in the sixth form.

Ripon Grammar School headmaster Martin Pearman had a challenging time keeping the secret of his son Joe’s results – an A* in chemistry and As in French and biology.

Joe Pearman, who’s going to Durham University to read biomedical sciences, said: “At the time of my GCSE results I stayed at a friend’s house. This time I was at home and was trying to read dad but it was pretty difficult. It was probably harder for him knowing my results and not trying to give anything away.
Mr Pearman said: “I didn’t look too miserable, which was quite encouraging, but it is a difficult secret to keep.”

Mr Pearman is well practised in keeping mum about exam results – Joe is his and wife Fiona’s third child to go through A levels following Alex, 23, who’s at Bristol University reading medicine, and Tom, 23, who did law at Oxford University and is now a solicitor in London.

Sally Pitts had to shoulder the responsibility of two sets of results as her twin brother Jonathan is currently in Saudi Arabia on a cultural exchange with the National Youth Theatre. The twins, of Burton Leonard, achieved exactly the same results – two A*s and an A – but in different subjects. They were also both cast members in Ripon Grammar School’s ambitious production of Les Miserable earlier this year.

Jonathan, who did A levels in French, English and psychology, will read education with English and drama at Cambridge University.

Sally, who did French, art and design and history, is going to Edinburgh University to read French. She said: “French was the only subject we both did so we practised our spoken French together, but other than that we worked independently and just supported one another. I’m so pleased we’ve done as well as each other.”

Laurie Edwards gained four A*s in biology, chemistry, maths and further maths and an A in the EPQ.

Kate Sabin achieved and A* in English and As in economics and psychology and is going to King’s College London.