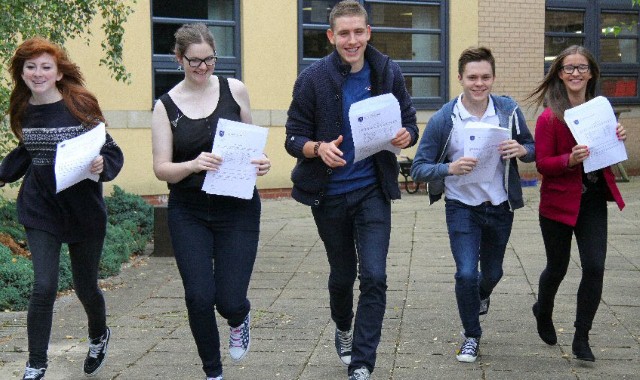 STUDENTS have excelled in science, engineering and English literature at The King's Academy, Coulby Newham, in today's GCSEs results.

The top three departments were all celebrating exceptional performances among the academy's overall results that saw 57 per cent of students gain at least five A*-C grades including English and maths.

Every student who took engineering passed with a grade C or better, while 99 per cent of those who sat science GCSE and 98 per cent of students who took English literature achieved a top grade pass.

Principal Chris Drew said: "Coming after last week's outstanding A levels in which 66 per cent of grades were a B or better, we are delighted with these very strong performances across a broad range of subjects at GCSE and congratulate all our students and staff.

"In its most recent inspection Ofsted judged The King's Academy to be a good school with outstanding features and we feel this summer's results, particularly at A level, would warrant an outstanding judgment at the very least for our sixth form provision."

The top four performers - two boys and two girls - are:

Abigail Grosvenor, 16, of Marton, who achieved six A*s and four As.
“I’m really pleased with my results. I thought I’d only get a B in science so I was very surprised to get an A. I’m planning to stay at King’s to go into the sixth form, which I know produces excellent A level results year on year.”

Francis Walton, with five A*s and six As, is laughing all the way to the bank after being promised £1,000 by his parents if he got an A* in literature.
Budding singer, dancer and actor Francis, 16, of Coulby Newham, who has performed with Stagecoach, Yarm, for the past 11 years is hoping to use the money to save up for a car.
“I’m over the moon,” he said, “not just with my results but also with the £1,000.
“I actually did better than I expected. I knew I’d put the effort into my work as I’d been revising since September last year, but it was still a great surprise.”
Francis is staying on at The King’s Academy for maths, further maths, history and science A levels.

Katherine Dent, 16, of Coulby Newham, will be staying at The King’s Academy to study history, English literature, government and politics and religious studies at A level after getting five A*s and three As
Katherine said: “I was really nervous waiting for my results but I had high hopes of doing well with all of the work that I’d put in. Five A*s was my target so I’m really chuffed with them and my three As.
“I got brilliant support from the teachers at The King’s and the revision sessions at school really helped to prepare me for the exams.”

Lewis Melvin, with four A*s and five As.

Twenty-five per cent of students gained the English Baccalaureate (EBacc), gaining at least a C in the core subjects of English, maths, history or geography, sciences and a foreign language.