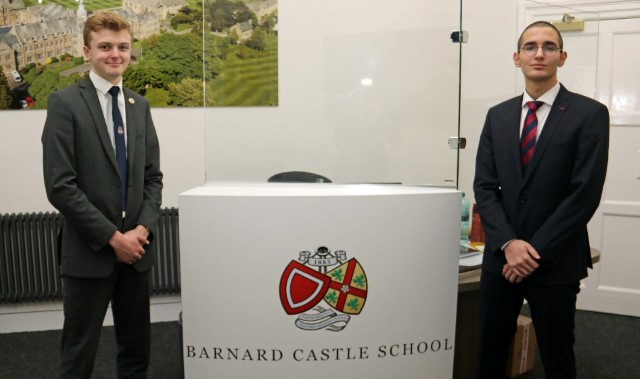 SIXTH formers proved the power of argument after winning a national debating competition held for the first time on line.

Barnard Castle School students Matthew Forster and Vato Vepkhvadze took the top prize in a competition organised by the charity Battle of Ideas (BOI), which was established to advance education by providing forums for discussion and debate.

A dozen schools from all over the country took part in the first ever online Debating Matters contest with Barnard Castle reaching the final where they took on Queen Mary’s College, from Basingstoke.

Matthew and Vato debated whether Britain should pay reparations for its colonial past, winning the argument that it should on moral and economic grounds.

“Vato and I have similar views so worked well together,” said Matthew, 17, who runs the school’s debating society and would love to work in politics one day. “It did become quite heated at one point as socialism took on capitalist ideology.”

Vato, who hopes to secure a degree apprenticeship in the UK or study in Canada, added: “It did demonstrate the benefits of team work as I argued the economic and financial points and  Matthew looked after the history and moral aspects.”

The students won £500 for the school library as well as books and magazine subscriptions.

A spokesman for BOI said: “The quality of the tournament has been exceptionally high, with genuinely thrilling debates. The pupils took the ideas seriously and relished the ‘substance over style’ format that Debating Matters offers.”

Barnard Castle School headmaster Tony Jackson added: “This is a remarkable achievement for Matthew and Vato, who began debating against each other in earnest during the first national lockdown and have progressed incredibly quickly and impressively since then.”