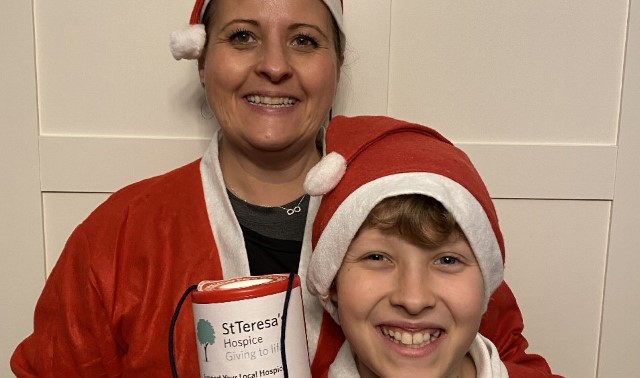 A FESTIVE charity run will have added poignancy this year for a mother and son who will complete the virtual event with a favourite uncle fixed firmly in their minds.

Sasha Warr expected her uncle Peter Wills to be cheering her on as she completed the annual Santa Run for St Teresa’s Hospice with her son Oscar.

Sadly, the popular volunteer at the St T’s charity shop on High Row, Darlington, died after a short illness leaving his family bereft but the two runners more determined than ever to raise as much money as possible for the hospice.

“My mum was in St Teresa’s a few years ago and it was one of the few place she was able to feel comfortable and relaxed,” said Sasha, of  Hurworth, who runs her own consultancy Outsourced HR.

“So I’d always intended to take part in the Santa Run and this year it was more important than ever as COVID has had such a huge impact on the hospice.

“We signed up for it shortly after Peter was taken ill and never thought for a moment he would not be there to watch. Now he has died we are dedicating our run on Sunday to him.”

Sasha, a hospice trustee and board member, has organised a Just Giving page at https://bit.ly/3fXbDV4 which so far has raised almost £900, exceeding their original target of just £100.

“He was such a lovely man and was the backbone of our family,” she said. “He volunteered after retiring and was so welcoming in the shop where he would work with my aunty Rose. He really was the nicest, kindest and most considerate of people.”

Sasha and Oscar have both been in training and will complete their run on December 6 in South Park, two of a host of more than 100 runners who this year will have to take care to socially distance as they compete in the first ever virtual run.

Previously the event has been staged at West Park Academy attracting hundreds of runners of all ages who dress in Santa outfits to run the fundraiser.

Chief executive of St Teresa’s Hospice Jane Bradshaw said: “We are all mourning the loss of one of our own and our hearts go out to Rose and her family. Peter was such a special man and we will be thinking of him deeply as everyone takes part in the virtual Santa Run.”

The run is one of the few activities this year managed to be staged in the face of the COVID-19 crisis which has decimated traditional efforts.

The Hospice needs to raise £3m a year to provide free in-patient and community care for people living with life-limiting illnesses and their families in Darlington, South Durham and North Yorkshire.

An emergency appeal launched in March raised more than £100,000 in a matter of weeks. Donations can be made at www.justgiving.com/campaign/hugtostts.