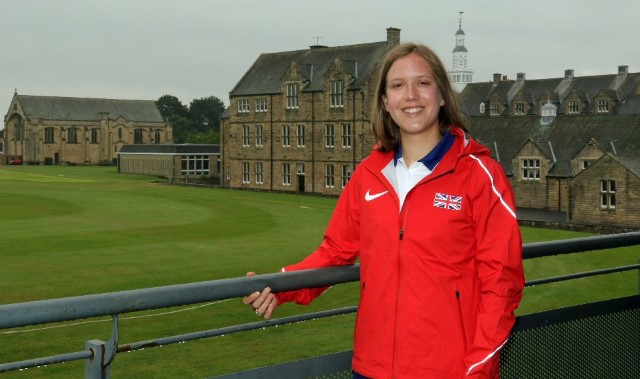 A SPRINTER’S training is off to a flying start after undergoing her first virtual session with national coaches as she pursues her Paralympic dream.

She attended her first virtual training camp at the weekend having spent most of this year working on strength, conditioning, recovery and technique with her coach Andy Woodward, who teaches at Barnard Castle School, and her mental preparation skills coach Mark Russell.

The 18-year-old was diagnosed with cerebral palsy aged 15 months but took up running in Year 3 while a pupil at Barnard Castle Preparatory School.

When India last competed in 2019 she was ranked 8th in the world, second in the UK, in the T35 competitions, which are for athletes who are affected in all four limbs.

The British Athletics Paralympic Futures Academy was established to support athletes with the potential to win medals offering them an elite training plan and coaching.

India is expected to attend her first training camp in person at the National Performance Institute in Loughborough in February.

A school sports scholar who hopes to read sociology at Loughborough University, India said: “This year has been a blessing for me as it has allowed me to work on some of my weaknesses, my technique and also my mental attitude. I am definitely stronger and have grown in confidence.

“I’ve realised that by being nervous at the start I was wasting a lot of energy. I felt anxious which made me tired. But now I’ve got the mental skills to use that nervous energy in the actual race.”

India trains four times a week in school and once after. “School has been brilliant allowing me to use the gym, Astro and track to train and the pool to rehabilitate after injuring my foot,” she said.

Mr Woodward, who has coached her for the past six years, added: “Her training has gone really well and when she did compete in one behind-closed-doors 150m event in August performed strongly.

“She has an outside chance of being selected for Team GB for next year’s Tokyo Games but more realistically we are aiming for Paris in 2024.”

Her training will also be helped by the school’s investment in sports GPS equipment and timing gates that help track speed more accurately.