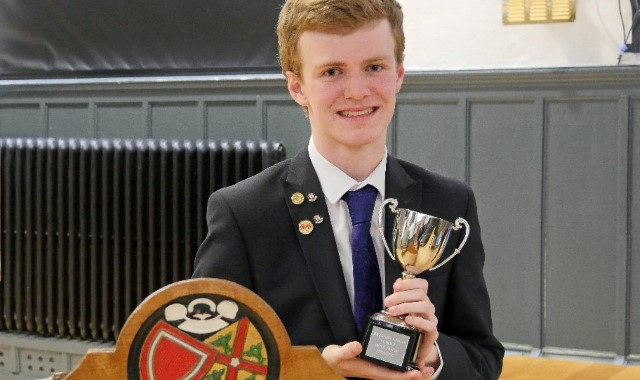 A YOUNG scientist has won a prestigious national award for an A level project which took an innovative look at carbon dot technology in medicine.

Sam Carling left Barnard Castle School this year with a string of top A levels and has just completed his first term reading a degree in natural sciences at Cambridge University.

He has now been awarded the Salters-Nuffield A Level Award for his essay – which was based on his Extended Project Qualification – entitled 'Could carbon quantum dots have applications in bioimaging?'

Each year, the Salters Institute recognises students who show exceptional performance in their external examinations in Salters-Nuffield Advanced Biology, Salters Advanced Chemistry and Salters Horners Advanced Physics. The awards are for £200 and all winners receive a certificate. This year, since external exams didn’t go ahead, the awards were given based on an essay competition.

Sam, of Bishop Auckland, was supported by chemistry teacher Elaine McDermott in his EPQ.

Carbon dot technology can track the movement of molecules within cells and is rapidly replacing older technologies in medical research.

“It’s a new field of nanotechnology which I was introduced to at Barney,” said Sam, who was offered an academic scholarship at Barnard Castle School when Wolsingham School closed its sixth form while he was in year 11 there.

“The dots, which are particles mainly made from carbon, glow under ultraviolet light, so you can use them to track the movement of other molecules in cells.

“At the moment, radioactive markers are used to do that, but unlike them, carbon dots don’t damage the cell. They’re showing a lot of promise for use in cancer research and it was a great project to be involved with.”

Sam, who is planning to work in medical research after university, said he was delighted to receive the award.

He also had high praise for Barnard Castle School, which submitted his Salters-Nuffield award entry, for allowing him to take five A levels, as well as his EPQ, which put him on the right path to his chosen field of science.

“I was really keen to take five A Levels and that was a major problem for a lot of sixth forms I visited, but Barney was with me from the start,” he said. “It was a nightmare to put together my timetable, but the school bent over backwards to accommodate me. Everyone was incredibly friendly and supportive and I’m now really enjoying studying at Cambridge.”