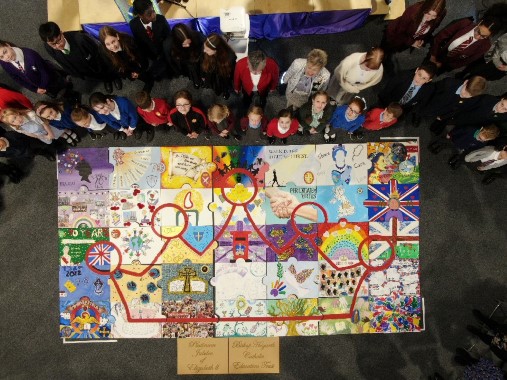 THE final jigsaw pieces have slotted home after years of planning as a new school community welcomed its final three schools into the fold just in time for the Queen’s platinum jubilee.

Her Majesty’s representative in County Durham, the Lord Lieutenant Sue Snowdon, was special guest of honour at a celebration event staged by the Bishop Hogarth Catholic Education Trust.

She witnessed the piecing together of a giant jigsaw featuring artwork inspired by the Queen from each of the Trust’s 35 primary and secondary schools which officially became unified on May 1.

Mrs Snowdon also heard a performance of the hymn ‘I Vow to Thee My Country’, the lyrics of which had been adapted by the children to mark the Jubilee, and a prayer written for the occasion by Year 5 pupil Ava Park, of St Paul’s Catholic Primary School, Billingham.

Mrs Snowdon said she would be sending the Trust’s recording of the hymn, a framed copy of the words and the prayer to the Queen.

BHCET chief executive Dame Maura Regan told an audience of children, staff and dignitaries: “On May 1 we became complete as a Trust, 35 schools from Darlington, Durham, Hartlepool, Stockton, and Billingham, 12,382 children and 1,671 staff, which is a phenomenal achievement.

It is important to have representatives from all of our schools here to celebrate what is a remarkable event in the history of our country and is a day to be remembered by all.”

The celebration was hosted by Our Lady and St Bede’s Catholic Academy in Stockton. The headteacher Mo Wilkinson said: “Over the past few months all the schools have been working on the Jubilee project, looking at the life of a Queen, writing our own prayers and exercising children’s artistic talents in the Jigsaw project.

“The children were asked to rewrite two lines of the hymn to embody the Trust’s aims of liberty, respect, tolerance, democracy and unity, to capture the essence of patriotism, as a message for such an auspicious occasion.”

Mrs Snowden told guests that her post originated with Henry VIII when it was designed to maintain a militia. Now it represented the Queen on formal and informal occasions. She was the first woman in the history of the post to hold the office in this area and as a former headteacher she was always keen to visit schools.

She said: “We could not have a better role model than Queen Elizabeth II, if you look at what she has contributed over the past 70 years as a statesman and ambassador for this country. She has never wavered from her promise to dedicate herself to her subjects. So we have a great deal to celebrate at the time of her platinum jubilee. This is our time to say thank you and I would like to send her your words, lyrics and recording of the hymn which embody all that she stands for and has worked to achieve.”

Dame Maura added: “The jigsaw is truly magnificent particularly the variety of the imagery in the 35 pieces which reflect the virtues of the Trust and an appreciation of the Queen. I am honoured and humbled to have such brilliant children in our Trust and there is nothing more important in life that ensuring we have safe, content and happy pupils in our schools.”