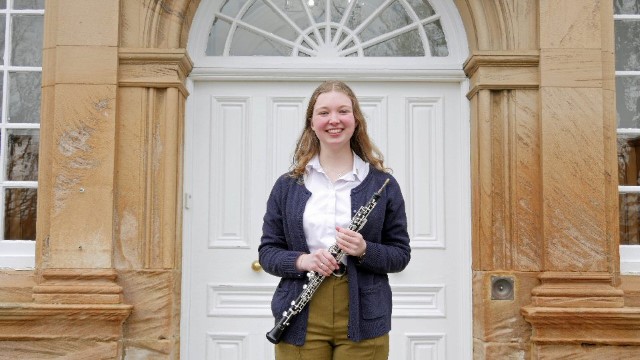 AN oboist is celebrating the end of her gap year on a high note after successfully securing a choral scholarship at Oxford University.

Former Barnard Castle School student Evie Brenkley gained three A*s in her A levels last year but chose to defer attending university and instead accepted a job as a residential music gap assistant at her old school.

While there, Evie reapplied to university and with the help of the school’s director of music Richard Dawson, secured a place to read music at Oxford University’s Hertford College, with a choral scholarship at Keble College.

“The pandemic was obviously very disruptive to both learning and the university application process,” said Evie, 18, of Barnard Castle, who took up the oboe eight years ago after learning to play the recorder at school.

“I didn’t enjoy my video interview for the University of Cambridge last year. Although I had other university offers, I was struggling to make such a big decision without being able to stand in the space and see myself there. I had my good results so I thought why not take a gap year to assess my options properly and hopefully make a more informed decision. I tried for Oxford on the off-chance and the interview was much better.

“The gap year was brilliant because I was not only able to take the time to think through my future options, but it also allowed me to see the ‘other side’ of music education. I was actually teaching oboe to a Year 8 student when the email came through offering me a place at Oxford.

“I adored school and really enjoyed making the switch from pupil to staff, but I am super-excited to go back to learning as a student again.”

The three-year BA Hons degree will see Evie analyse and critically listen to various forms of music, study its history, psychology and place in society and also tackle composition and performance.

She will also join in with extra-curricular music by playing oboe in one of the orchestras and fulfilling her duties as a choral scholar by singing Evensong in the Chapel at Keble College three times a week.

“Taking a gap year was a bit controversial, and not something I’d ever expected or planned for,” said Evie, who was deputy head girl and head of choir in her final year of school and learned the tenor saxophone and ukulele over lockdown.

“But I am glad I did it as I had a great time and have had so many experiences that wouldn’t have been possible if I had headed straight to university. It was definitely the right thing for me to do.”

Headmaster Tony Jackson said: “We were only too pleased to offer Evie the chance to stay on at school as a residential gap year music assistant and she proved to be an exemplary member of staff, as she had been a student.

“The work skills she learned over the past year and increase in self-confidence we witnessed will certainly stand her in good stead for her studies in Oxford and in the workplace once she decides on her future career.”