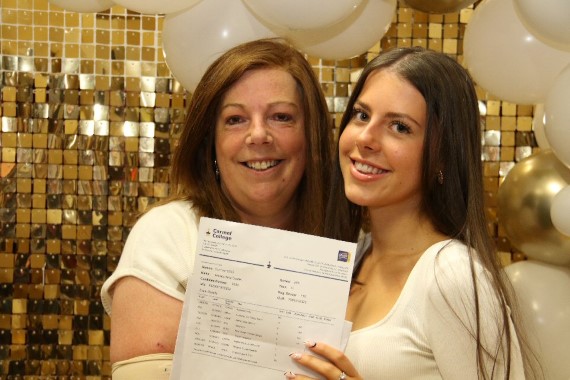 A STUDENT was overwhelmed with her GCSE results yesterday after securing top grades despite having to cope with two members of her family being diagnosed with cancer.

Jess Cowan, of Carmel College, Darlington, gained eight GSCEs, including grade 8s, after working tirelessly on her studies while she supported her mother Helen and sister who were diagnosed with cancer within months of each other.

“It was a double blow when my mum was diagnosed with breast cancer and my sister with leukaemia within three months,” said Jess, who plans to stay at Carmel College to study A levels in biology, psychology and business and has an eye on a career in medical sales.

“But I just tried to focus on my work and revision which became a welcome distraction. I ended up coping better than I ever thought I would. The school was amazing, I couldn’t have received more support. They even sorted me out some counselling sessions which helped. I feel a bit overwhelmed today getting my results.”

Helen added: “For Jess to come through all of this and get some amazing results is the icing on the cake. Somehow we all found inner strength and I’m glad our treatment is going well.”

Serenai came to Darlington unable to speak a word of English yet four year later secured three 9s, four 8s and three 7s. “It was hard at first because of the accent and speed people speak but then suddenly I started to understand everything,” she said.

Amelka gained 11 GSCEs including one 9 and six 8s. They are both looking at careers in science.

Volunteer and charity worker Jonathan Wilson-Downs, 16, successfully fitted his studies around helping refugees in the town and being production assistant for the Little Shop of Horrors school performance.

A keen pianist, he gained six 9s and three 8s and will stay on at Carmel College to study maths, further maths computer science and music. “I am delighted with my results and now need to work out which university to go to and a possible career,” he said.

Overall Carmel College’s results were above national attainment on every measure.

Carmel College principal Mel Kane said: “It has been fantastic to celebrate the superb achievements with our pupils, parents and teachers. Our students have shown great resilience to achieve results above the national picture and we are so proud of them and excited to continue the journey with them at our sixth form.”