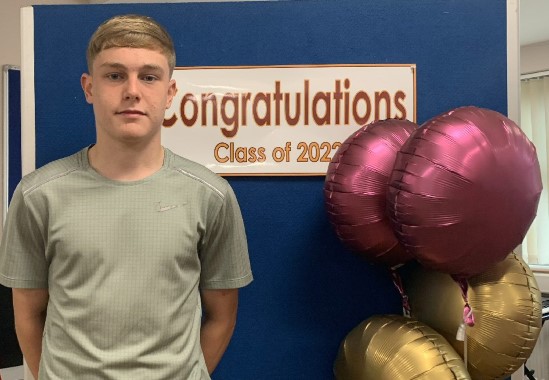 A PROMISING winger proved he was on the ball with his school work as he collected his GCSE results yesterday.

The 16-year-old, of Spennymoor, won a scholarship with Middlesbrough Football Club’s youth academy and has also played for England U18s.

He said: “I got on really well with my teachers and am very pleased with my results. My dream remains to play football professionally and I’d love to play for Real Madrid.”

Will Lister was also thrilled with his results, particularly as he has had to overcome serious health issues. The 16-year-old was diagnosed with cancer when he was 10 and is also a chronic asthmatic.

“Because of COVID this meant I had to miss a lot of school as I was shielding,” he said. “But I had really good support from school and am staying on at sixth form to study A Levels in maths, further maths and economics.”

Jak Camp, of Hunwick, was celebrating after securing 9s and 8s. The keen euphonium player won the school’s Father Towers’ Award, which is a special accolade awarded to 2 students each year who have demonstrated excellent commitment and dedication to their studies and to the wider life of school.  Jak is continuing his studies at St John’s Sixth Form as is Eleanor Tippey, the second recipient of the Father Towers' Award, who was thrilled with grades much higher than she’d expected. She hopes one day to be a human rights lawyer.

“The school has been great and very supportive,” Jak said.

Jacob Cousins, of Crook, was over the moon with his grades that included 9s and 8s. He will study at the school’s sixth form with a view to becoming an engineer one day.

Lisa Byron, Headteacher said, “We are incredibly proud of our students and their impressive results reflect individuals’ excellent commitment and determination to do well. Despite the disruptions to their education over recent years, our students have risen to the challenge and, with the continued support of parents, carers and our dedicated staff, many have developed greater resilience to excel in their studies. We look forward to welcoming students back into St John’s Sixth Form and we wish everyone every success and happiness as they begin the next stage in their education, training or employment.”